Time cannot steal the treasures that we carry in our hearts- nor ever dim the shining thoughts our cherished past imparts.
-Headstone inscription, Oakridge Cemetery

The Legend
The legend of Michael Bashor is quite simply this: There is a statue of an angel watching over his grave that is said to shed tears of blood. Reports of statues that shed tears of blood or oil are hardly uncommon and pervade much of the civilized world. The majority of statues purported to shed tears are those of the Virgin Mary, and Jesus Christ, but crying statues of other religious and nonreligious icons have also been reported. Although the legend of Michael Bashor seemed unlikely, WISP deemed the legend worthy of investigation.

WISP began the investigation by contacting director of Goshen cemeteries Dan Liechty and securing permission to enter into Oakridge Cemetery after nightfall. Dan was very accommodating to our needs, and asked us to share with him any evidence of paranormal activity captured during the investigation. Dan told us that the earliest burials in Oakridge date to 1832, and that the cemetery was deeded to the city of Goshen, Indiana in 1959. He also informed us about an older gentleman that lived just south of Oakridge that had witnessed strange things happening in the cemetery after nightfall. Dan told us that the man was reliable and might be worth talking to.

Sampsun and Amber were unavailable due to making preparations to sell their house and move to Indiana, so the decision was made to conduct the investigation in two phases. Becca and I would do preliminary research and investigate the cemetery on our own, and we would return to Oakridge as a full team at a later date. Conducting the investigation in this way would allow me to collect data and analyze my theory that collectively, team WISP is a magnet for paranormal activity.

Daytime in Oakridge Cemetery
I was in-between writing projects and had the day off work, so I decided to make the thirty-minute drive to Oakridge Cemetery to locate and photograph Michael Bashor’s grave. I brought along my digital audio recorder so I could do a little daytime EVP work as well. I had never visited Oakridge Cemetery before, and I envisioned the graveyard to be small and modest. This vision turned out to be wrong. As I pulled the van onto the single lane road that leads into Oakridge Cemetery, graves and headstones greeted me for as far as the eye could see. Locating the grave of Michael Bashor was seemingly going to be a real chore. As it turned out, I was wrong about that as well. Upon stopping the van and snapping a few photographs of the cemeteries entrance, I noticed that the graves at the far end of the burial ground boasted a number of very large monuments. I figured that was as good a place as any to start searching, so I maneuvered the van to the back of the cemetery and gathered my gear. As it turned out, I had parked the WISP van directly in front of the grave of Michael Bashor. 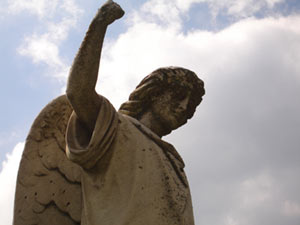 Standing over fifteen feet tall (including a life-size angel statue), Michael Bashor’s gravestone is impressive to behold. According to the inscription, Michael Bashor died December 4th, 1880 at the age of seventy-four. The base of the monument (which is inscribed with the symbol of Freemasonry) towers well over my head, and is beautifully carved in rich, brown marble. The statue is that of a male angel whose left hand holds a cloth that partially enshrouds an urn, and whose right hand is poised as if it once held a spear. Upon closer inspection, it wasn’t difficult to understand how the legend of the statue crying tears of blood came to be: reddish-brown water stains dot the angels face and robe, giving the statue an eerie, almost frightening appearance. After snapping an assortment of photographs of the monument, I began the task of mapping out the layout of Oakridge Cemetery in a notepad. After two hours I had barley made it through one third of the graveyard, and I realized that investigating Oakridge Cemetery in a single night would be all but impossible. I returned home with my data and began sifting through the daytime evidence. The digital photographs and two and a half hours of audio I had recorded in the cemetery reveled no anomalies of any kind.

Researching the Legend
Much to my dismay, I was unable to dig up any concrete information as to the origin of the legend. In fact, other than numerous undocumented reports of the statue shedding tears of blood, I was unable to unearth (no pun intended) any information about the angel statue that keeps watch over Michael Bashor’s grave. Undaunted, I decided to put together a series of paranormal experiments for Becca and I to conduct during the nighttime investigation and to interview the eyewitness that lived across the street from Oakridge Cemetery. As it turned out, the eyewitness and the stories he shared with me were quite compelling.

Witness to the Dead?
The eyewitness (whose name I will withhold for reasons of privacy) was a kindly older gentleman who was retired from work at a local train yard. Upon knocking on his door and introducing myself, I explained to the gentleman what I was up to and asked if he would be willing to speak with me about the things he had seen and heard in Oakridge Cemetery. He said that he would be more than happy to talk with me, and I was invited to sit with him on his front porch and listen to his stories. Unsurprisingly, the gentleman informed me that local teenagers would frequently sneak into Oakridge after-hours to hang out and party by the grave of Michael Bashor, which is located directly across the street from his home. He told me that for the most part the teenagers were well behaved, and that he had only been compelled to report the illegal after-hours visits to authorities on several occasions. He went on to tell me that as far as he knew, there had never been a formal paranormal investigation conducted in Oakridge Cemetery. It was at that point our conversation took a turn for the weird.

The older gentleman, who had been surprisingly relaxed and casual in his tone and manner throughout our conversation, suddenly seemed distracted and concerned, as though recalling unpleasant memories and emotions. He sat in silence for a time as though in introspection, and then turned to me and said, “I’ve seen things happening in that cemetery I cant explain.” He told me that on three separate occasions he had witnessed a pale woman wearing a long, flowing white dress walk through the graveyard and stop in front of Michael Bashor’s grave. He said that on all three occasions the woman would just stand there looking up at the statue of the angel and that he could hear her weeping. “Then,” he told me, “she would vanish into thin air right before my eyes.”

The gentleman went on to tell me that upon occasion he would see things moving around among the headstones at night, but that it was always too dark to make out what they were. “They could have been anything,” he admitted. Having listened to his stories, I thanked the gentleman for his time and headed for home. During the drive, I was struck by the sincerity that had been so prevalent in the old mans voice as he spoke. Whether the woman in white had been human or specter, I was convinced that he genuinely believed that the things he had witnessed were real and not hallucinations. But the question remained: If the ghost of a woman in white haunts Oakridge Cemetery, would she reveal herself to WISP?