Editor's note: Ghostvillage.com believes we have debunked this photo. Please click here for the explanation. 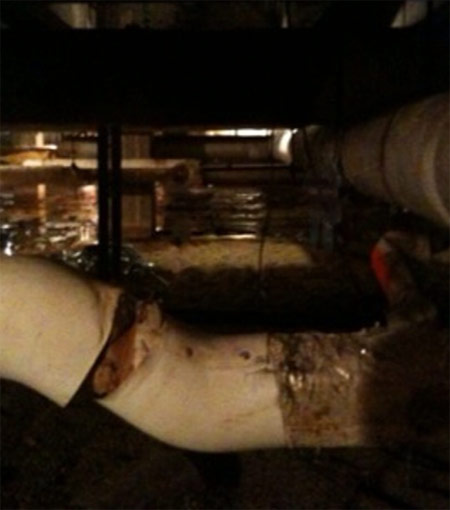 I work as a steam/pipefitter in Connecticut. Our current location is the steam tunnels under the West Haven Veteran's Administration Hospital in West Haven. These photos were taken by my co-worker, on his iPhone.

It was about 3pm, and we were starting to clean up to leave. I was above at the time when he came crawling out of the hole out of breath and looking pretty pale. It took him awhile to regain his composure and tell me what it was that had happened, and he pretty much just showed me the pictures on his phone. He said he got an "odd feeling" like he was being watched over, and just started taking pictures around the tunnel. The previous and after shots didn't seem to have anything in them. This one was amazing, though. It looks like an early American soldier in a uniform with a rifle. You can see that hat and the hands, what looks like a bag around the hips, and obviously the rifle. The pipe next to the apparition reaches about 5'5" from the top to the floor, putting our soldier at a shorter stature than most men nowadays. Other people who have seen this picture keep telling us they see a young girl or boy and an older man in the picture as well, but we just don't see it ourselves, any feedback would be great. We still work in these tunnels every day, and it's definitely made us more aware of our surroundings! This hospital has a long history and an interesting connection to another well known paranormal "hot spot," the Winchester Mystery House. The hospital was originally named after William Wirt Winchester, husband of Sarah Winchester, the builder of the house.

I'm emailing photos of the original hospital with some info on them, a picture of the modern day hospital with the location of the encounter, and obviously the pictures of the apparition. The original, a zoomed and cropped version, and an outlined version. 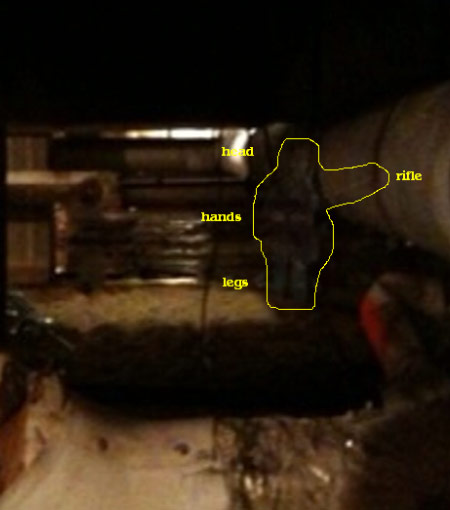 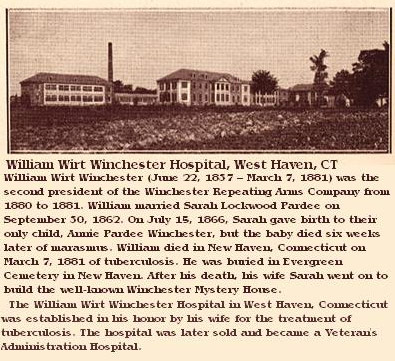 The iPhone has an application (possibly several now) that will automatically insert a semi-translucent "ghost" into any photo taken with the iPhone.
Steve Duncan, an alert Ghostvillage reader believed the "ghost" in this photo looked familiar. He took the photo below using his iPhone with the
"Ghost Capture" application. The similarities are obvious. You can learn
more about this application and see the other "ghosts," this app can imprint
on iPhone picture
here. Ghostvillage.com has decided to leave this photo up as an example
of how we can be duped. 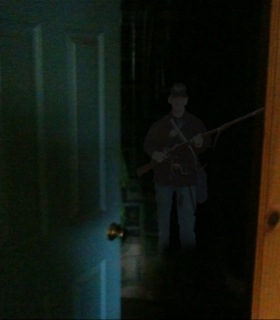