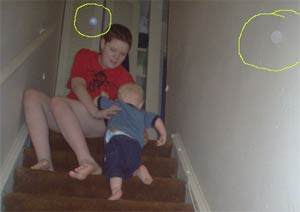 I have lived in my apartment since about 1994. My husband was disabled with a disease called Myasthenia Gravis which makes you severely weak. He went through a major depression about 5 years ago (we are no longer married, I remarried and still live in the same apartment). During his depression, he wouldn't come out of our bedroom, he'd stay in there in the dark and just listen to music. I started waking up and seeing a green glowing face on the wall. At first I thought it was a dream, then I started seeing what appeared to be words, always at night and I would waken suddenly. I never said anything to my child who was about 7 at the time, but one night he told me to please leave his nightlight on because he was awoken by a green face that appeared on his wall.

I started praying and told my husband to pray also, although all he did was curse God for being so cruel to him and disabling him at such a young age (22). We later divorced because of his negativity. When he left it left — at least it seemed like it, the atmosphere in the house seemed to be light and calm. Even guests would comment. Then I got remarried about 2 years later. My husband and I would fight about the silliest things, felt like pure chaos in the apartment. I soon started to be awoken again in the night, but it took on a human form. One night I awoke to see what appeared to be an old man with white stringy hair, bald on top just starring right at me while I slept. I still get chills thinking about that face. Then I would have things moved such as my baby's bottle. I set it next to me on my nightstand for when he awoke, to find it gone. Turned on the light, but nothing. My hubby and I looked everywhere just to wake 2 hours later to have it sitting right beside me in its original location. Now my hubby and son would hear it, they couldn't help but not hear it — severe banging in the walls, but for the first time my hubby awoke to see the same thing I did. I was awakened to see the old man hanging upside down from my bedroom ceiling, hair dangling down as well — he had on an old prison outfit that was black and white striped. My husband awoke and saw exactly what I saw, it stayed for a few seconds, disappeared, and then my bedroom door closed about the same time by itself. I still hear it.

Lately, it has taken on a form of a blueish green light that will eventually turn into a black figure — not the form of the old man. I have felt it touch me. It feels like electricity, as if your being shocked — sometimes a bit painful. The other day my sister was here and we were talking about "it" and then the banging started. It bothered her so badly she started to flee. I am getting used to it, though. I feel that it has something to do with me, if I get upset or angry I hear it the most, then so does everyone else. I live in a townhome apartment and the neighbor to my right is also having problems. She hears it call her name when she is alone, and every night at 11 PM, her kitchen cabinets open by themselves. She mainly hears it coming from upstairs as well.

This picture was taken about September 5, 2004 with a digital camera. The upstairs bedrooms and hall is where a lot of activity takes place. Sometimes on the stairs you can feel a presence. I would say about a month ago, I saw what appeared to be a blue/gray mist at the top of the stairs while I was laying in my bed. It started off small and grew larger until it reached my bedroom and then started taking on a black human shape form, then disappeared. It was coming straight towards me. If anyone wants to email me please feel free to do so.