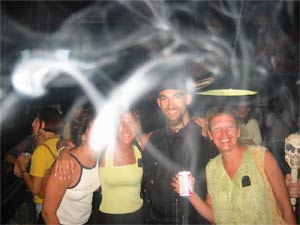 Here's what I remember about the local legend:

Captain Tony's (named after Captain Tony Tarracino) was the original Sloppy Joes, but after a rent increase, the Captain (supposedly with the help of Mr. Earnest Hemmingway himself) picked up the whole inside of the bar and moved it to the other side of Duval Street. Since then, it has been an Ice House and a makeshift morgue.

Many years before the good ol' Captain was even born, the local hanging tree was conveniently located right next to the morgue. One night, A women (known as the women in the blue dress) killed her husband and two boys. She chopped them up and dragged their body parts into the back yard for the animals to dispose of. However, a neighbor saw what she did and called the police. When the police arrived, the women, who was quite warn out, was lying on her bed in a blue nightgown covered in blood. They immediately brought her to the hanging tree and hung her. However, she did not die instantly. It took her over one and a half hours before she died. A few years later, a big storm washed away the morgue. The morgue was relocated up the street. Captain Tony's was then built around the hanging tree and on top of the old morgue. During excavation, several bodies were found from when the morgue was washed away. With no money to relocate the bodies, the concrete was poured on top of the bodies and bottles of holy water inserted into the concrete.

The ghost is supposedly of the women in the blue dress, but since the bar was built on top of a morgue, there could be several spirits taking residence there.