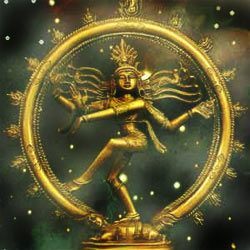 Rajeev Rajashekar from Kerala, India, is a United Nations staff member in Manama, Bahrain. He often works after hours in his second-floor office. Around 10 pm one evening, the hallway lights began turning off and on. The door to a colleague’s office repeatedly opened and closed. Rajeev was startled, yet remained until the activity became unbearable.

He wasn’t the first staff member have these experiences. The building once housed the Korean Embassy. A female diplomat allegedly committed suicide in her second-floor office. This made sense to Rajeev. A practicing Hindu, he believes suicide traps a soul on this earth, delaying the next stop on a reincarnate destination.

The Hindu Way
The Hindu path is the world’s oldest religious perspective. It is a philosophical system as fragrantly diverse as its associated cultures from India to Africa to Hari Krishna devotees in the West. Expansive in approach, Hindu cosmology is intriguingly paranormal friendly.

Most Hindus refrain from calling Hinduism a religion, preferring “philosophy” or “mythology.” Paranormal events in India are explained within local folklore, often hybrid theories between Hindu and Islamic influences.

Religious texts include the Bhagavad-Gita Gita, Vedas (to name a few) and approaches are as diverse as the 330,000 supernatural beings available for worship. The scriptures are mythical in nature and reveal extant beliefs in reincarnation, the concept of subtle bodies (ghosts), and gods that travel by flying apparatuses. There isn’t one “Hindu” approach to the paranormal. There are several tantalizing ways to discuss some widely discussed paranormal concepts.

Reincarnation
Hindu beliefs embrace the concept of reincarnation. The purpose of the soul on this earthly plane is to seek knowledge for spiritual advancement. Upon death, the soul is placed back into the cosmic order and reincarnated based on collected karma during the physical life. Bad actions equal bad karma, thus a lower reincarnated status.

Dayavira Das of a temple outside of Durham, North Carolina explains, “Someone like Hitler, for example, may come back as an animal. While Mother Theresa may be elevated to the celestial heavens for some time. And it is like a credit card. You score points for good karma, but once those points are up, your soul is recycled. This is a continuous process.”

The never-ending journey of the soul makes Dayavira reluctant to accept the validity of past life regression.

“We have so much emotional and karmic baggage of this life. How could we cope with carrying that from all of our previous lives?” He suggests that the soul may retain ambiguous imprints of previous experience. This may rationalize why some people are inexplicably drawn to certain hobbies or interests.

Folklore in India suggests small children can recall past lives. These memories diminish as children age. When a child exhibits mature knowledge or discusses unexplained experiences, these are considered signs of past lives. Dr. Kirti Rawat attempts to document such memories in children. He is the director of the International Centre for Survival (of the soul) and Reincarnation Researchers. He claims to have evidence, the strongest being a small child who is able to detail the events of her previous death as well as happenings prior to her reincarnation.

Astral Realms and Matters of the Soul
There are three “realms” in Hindu cosmology. One is the earthly realm, another is the in-between world, and the last is the realm of the gods. The godly realm is one of extremely high energy, existing at the quantum level of the universe.

Souls travel throughout the realms and enjoy a physical body while on earth. Death continues the journey when the soul is “freed” from its corporeal constraints. In an ideal situation, death is a spiritual evolution, with the goal of ascending to the realm of the gods.

Cutting this journey short through self-inflicted death is believed to leave the soul trapped in the in-between realm, at least for a while. The soul remains attached to the subtle body (or astral body), unable to fully ascend to the astral plane in its allotted time. This subtle body is the ego, intellect, and energy behind the physical. This could be what Western paranormal researchers refer to as an “intelligent haunt.”

The physical body is considered a spirit container while in the earthly realm. Cremation is necessary to completely disassociate the soul with the physical and assume full ownership of the subtle body. Dayavira suggests paranormal activity may be heightened in Western societies due to the tradition of burying the body. The soul remains in the in-between zone, unable to proceed. The Hindu perspective is in contradiction to some Western ideas that a “proper” burial reduces the likelihood of a soul returning to haunt.

This in-between zone has three subdivisions. One is the realm of the higher mental plane and thought to hold angels. The second subdivision is the world of the departed where Earth-bound souls reside. The final subdivision is the abode of darkness where the asura (demonic) forces are found. Sinful souls may have to hang there for karmic justice before being reincarnated back to the earthly realm. However, the concept of an eternal hell and heaven do not exist. Souls are in constant journey.

Things That Fly
The journeying of the souls is not the only form of celestial travel. Hindu scriptures are peppered with descriptions of flying chariots and machines called vimana. Several scriptures reference winged chariots of the gods, while others provide detail of mechanical aircraft. Moreover, the deva (angelic celestial beings) and asuras (demonic) are imbibed with superhuman power, including the ability to fly throughout the cosmos in vimana. While this doesn’t offer “proof” of UFOs, it raises questions how such an ancient mythology (texts date from 1500-400 BCE) include such intriguing references. Current UFOlogists find Hindu scripture insightful both in the sophistication and detail of flying objects and astral weaponry. Furthermore, Hindu texts are so explicit in measurement and understanding of Time that more study is needed to appreciate how the knowledge emerged.

Many Hindus see these stories as myths, but Dayavira begs to differ. He explains there are celestial planets beyond the realm of our universe, “beyond what scientists can see or comprehend,” where gods and elevated souls reside. Yet he suggests that the deva and asura have no incentive to make their aircraft visible.

Harmony of the celestial spheres is meshed with Hindu philosophy. Vedic astrology impacts every day life. Marriages are arranged to take place during auspicious planetary alignment. The misfortune of birth under inconvenient planetary arrangement may be an omen.

Astral projection is the ability of the soul to temporary travel outside of the body, is associated with Surat Sabda yoga. Reaching a state of spiritual perfection allows one to travel through the astral spheres. Dayavira says there have been spiritual masters who could “enter the Ganges River at one end and immediately emerge somewhere else.” The Ganges itself may be a spiritual portal, but some devotees assert astral projection is unlikely to occur in the current age.

“We don’t have long enough life spans to master this technique,” he explains. Many Hindus believe we live in the age of Kali Yuga, where human life is too short to reach such elevated spiritual planes. Kali Yuga is also characterized by disharmony, hardship, and spiritual poverty. This era is thought to last 432,000 years and began roughly around January 23, 3102 BC. Time is cyclical in Hindu scripture. At the end of this epoch, Satya Yuga, the first era, will begin with humanity harmoniously realigned with the gods.

The paranormal side of Hinduism is a deeply fascinating, curry-scented approach. Christian, Spiritualist, or Western paganism currently informs contemporary paranormal metaphysics. This allows a “Westernization” of paranormal thought where alternative approaches are unintentionally excluded. The supernatural side of things is enjoying global popularity. Considering non-Western approaches may yield new theories while encouraging innovative technology in documenting the unexplained.