Ghostvillage has always provided insightful information on haunted sites. In fact, Ghostvillage vaults are so rich with spooky lore that Jeff Belanger wrote a best selling book from the archives, and the new edition of The World's Most Haunted Places: From the Secret Files of Ghostvillage.com is out now!

While Ghostvillage continues to offer readers information on personal encounters and ghost related topics, many paranormal teams around the US (and the world) are discovering awesome new haunts.

Ghostvillage will share insights about these newly emerging spooky sites. One does not have to believe in ghosts to appreciate how public paranormal interest can benefit a historic location. After all, these places and their spirit inhabitants are the real "paracelebrities!" 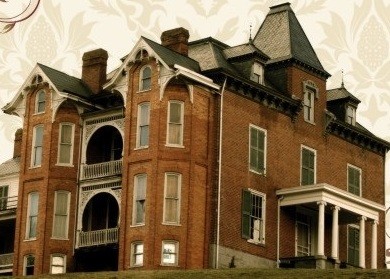 In the hills outside about 20 miles east of Radford, Virginia, there is a gravel road that travels deep into the woods. The road crosses rolling streams, a quaint abandoned mill, and a deer-filled forest. One turns around the bend to find a stately home at a place called Cedar Run. Major Graham Mansion, and the large estate that includes a remarkably well-preserved slave quarters, two spring houses and a barn, strikes a commanding presence.

And, according to paranormal investigation teams like Virgina Paranormal Society(VPS), the site is paranormally active.

They were the first team to investigate Major Graham, and few know the site as well as VPS.

Major Graham Mansion has a complex history of gothic Southern, Civil War proportions. Squire David Graham, an Irish immigrant, purchased the land in the early 1800s. The location had bewitched history even at that time. Slaves allegedly murdered the previous owner on the site in the late 1700s, and in turn, they were hanged on the property.

Squire David built Major Graham Mansion and moved his wife, Martha Bell, into the home. The marriage was not considered to be a good one. Research suggests that Squire David may have hit the bottle too hard and that his wife suffered from depression.

Their first born son, Major David Graham, the home's namesake, was born in the house in 1838. He lived in the house his entire life and served as a Lieutenant in the Civil War. The attic floor of the house includes what is called the "Confederate Room" with a secret panel that some believe was used to conduct military meetings during the war years. It is quite a contrast to the basement of the home, which includes a shackle room thought to have harbored disobedient slaves. There is an upstairs classroom where Major Graham's daughter taught local children during the Civil War, and this room is considered to be one of the more active spots in the home.

The mansion passed hands to other colorful personalities, including a Reid Fulton who enjoyed walking around nude. This law professor owned Major Graham from the 1940s until the late 1970s. The home was listed in the National Registry of Historic Places in 1984.

The current owner has made many restorative efforts and launched "Graham's Fest," a local music festival, scheduled to reappear in 2012. There are other public events planned for this sprawling property, which now includes an outdoor stage. Major Graham also offers paranormal-themed happenings and enjoys sharing their spirited history.

For sure, there is some real spooky stuff going down.

Things That Go Bump and Hum in the Night

An employee at worked told him about his own experiences on the property. He drove up to the property and met the owner. After some time, that first investigation was granted.

"Our first investigation of the mansion seemed very quiet as we spent around twelve hours in this location recording audio and video in hopes of finding evidence to the claims we had heard about," Nick recalls. "The next day when we started to review all the footage from the investigation we were absolutely stunned at what we had on audio. We caught a little girls voice on audio asking a question 'What's your name?' Ever since our first investigation in October 2007, we have collected more potential EVP and have had numerous experiences."

He shares one of his favorite personal experiences at Major Graham. "I was in the classroom on the second floor. I had heard something strange outside the room. So I looked towards to the doorway and within a few seconds, I saw a shadow of a person – the head and shoulders — peak into the room and then back out. I immediately had chills and as I went to check things out. I noticed no one was outside of the room. I contacted our base unit and they advised me that no one else was on the second floor with us."

He wonders, "Was it a spirit? I don't know but I couldn't figure out what it was after numerous attempts to recreate it. That is just one of many experiences we have had. We have had our hair pulled, our pants and shirts tugged at, we've heard whispers and conversations in other rooms, and we've even been touched."

I investigated this site in April 2011 with Nick and some VPS members. The ground's massive size is impressive as well as its preservation. The two-story slave quarters still stands along with their washing house. A spring house, one large and one small, dot the property as well as the barn. Most of the property, barn included, has yielded EVP and a slew of personal experiences.

Evidence collected on site includes a vast array of personal experiences and EVP. We captured an intriguing EVP in the Music Room during our investigation. This particular room has a piano thought to be original to the home. I briefly sang the old traditional hymn, Amazing Grace, and stopped mid-verse. This is a technique I sometimes use to see if something will "finish" the tune.

Upon review, we recovered woman's voice going, da da daa da. Another team of investigators, located upstairs, confirmed they were not the source. It seems something was, indeed, singing with me.

Haunted South TV recently completed a documentary investigation at Major Graham. John Edwards, Hauted South's lead investigator, says that the team collected over 300 EVP over the course of four investigations at the mansion. They feel over forty are Class A in quality. Edwards sugests that he has documented part of the Major Graham's complex history. "I was able to piece together a rather compelling story," he elaborates. "Whether it was the one of who we believe to be Martha Graham in the basement saying 'Can You Please Tell Gracie…I Need Her,' or the sound of little girl whispering 'hide'…the story only starts there." He feels they have captured evidence that one of the Graham men still "rule over the house with an iron fist."

"We also have what is possibly one of the creepiest things I have ever seen featured on our documentary," John continues. "Stacey, my wife and co-lead investigator, did a solo session in "Clara's Closet" with a IR night vision camera and a special high gain microphone. Stacey asks a basic early EVP question with 'Is there anyone in here with me?' to which we get an immediate class A response of a smooth talking, deep voiced male spirit who says 'I'm in here with you!' It has to be seen to be truly appreciated."

There are many ways to enjoy this unique property. Major Graham hosts several paranormal-themed seasonal activities through November with Ghost and History Tours. The location also features Spooky Woods, a haunted barn attraction. Paranormal groups can also investigate the location, up to 20 people, for a fee. The investigations are managed by the property.

Visit here for more info about visiting or investigation Major Graham. Tell them Ghostvillage.com sent you!