Click on picture for larger view in pop-up window. 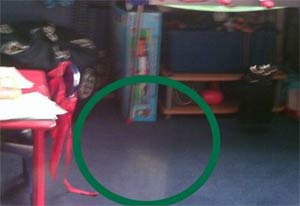 My partner was off of work ill and being that it was just after Christmas I decided to tidy my son's room while he was at school and get rid of a few broken toys. I put all his actionman stuff into a big box as it was spread about. I put the box away then found I missed one figure so instead of getting the box back out, I put the figure on a bookshelf. I must of turned on the action man which is a room guard that has a motion detector in it (when somebody comes into the room it tells them to get out).

My partner was on our computer in our bedroom and I went to see what he was doing when we heard the actionman react to movement in my son's room. The first few times we ignored it, then we both looked around the door every time it went off. We saw nothing, but we both knew that maybe something was going on. We both had strange experiences before and we thought our flat was pretty spirit-free compared to my parent's house where we used to live, but in the last few months we have heard noises, bangs, and footsteps. Down the hallway, my son once said he saw a tall man in his room. When I woke to hear my son crying one night, I thought I also heard voices, but I put them off as someone outside so I didn't get freaked out. I've seen things in my peripheral vision moving. and see things in the hallway near to the entrance to my son's room (we live in a flat). I've seen a tall man with no shirt on, small scurrying things, a shape like a crawling baby, and, although I don't feel scared or threatened, I suppose it's just a bit freaky.

Back to the actionman-thing. The following day my partner returned to work and I remembered what happened the previous day so I stood actionman up and turned him on armed with a digital camera. As he began to shout, "Hey you, get out!" I took a picture and got a surprise. A strange-looking face traveling just along the floor. I was pretty freaked out and phoned my partner. After I got off the phone, actionman fell off the table that he was standing on and I heard another noise that I could not locate — I later discovered one of my perfume bottles had been knocked over in my bathroom. I want to do it again, but feel that the thing is not happy about being photographed. I'm nervous — I might wait until my partner is home for the day!