Click on picture for larger view in pop-up windows. 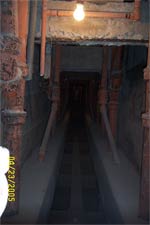 I was recently visiting the amazing and beautiful city of San Francisco when I decided to take a trip to Alcatraz. I mean who can visit San Fran and not go so "The Rock!?" Upon completion of the audio tour portion of my visit to Alcatraz, I was able to roam freely throughout many areas of the main prison building where the cells are housed. While walking along Cell Block "A" towards the supposed cell of Al Capone, so that I might take a picture I heard sounds that were kind of a mix between scratching and crying. I looked around and could not see any one that appeared to be upset anywhere near me. To top it off, the tour I took was the evening tour and it was about 7:00 PM or so, so not as many people where there. After hearing the sounds a few more times, I followed them into a room off to the side of Cell Block "A" that had a spiral staircase up to the second and third floors. Beside the stair case, running down behind cell block "A" was some type of barred-in shaft that looked as though it held all the plumbing pipes for all the cells. I could only see maybe 5-10 feet at most into this shaft — it was pitch black beyond that. This shaft seemed to be where the sounds were coming from. I decided to take a quick shot with my digital camera just to see if my flash picked anything up. Unfortunately, the screen on my camera is so small, I was not able to see anything in the picture, nor did I see anything when the flash lit the shaft up so I just gave up and walked away. When I got home from San Francisco four days later, I loaded the pictures up onto my computer screen and started going through them. By this point I had totally forgotten about he experience I had at Alcatraz. However, when I came to the photo I had taken of the shaft, I noticed something in the background that kind of gave me the chills and quickly reminded me of the sounds I heard. The closer I zoomed into the picture, the more sure I became of what I was seeing. You look for yourself and make your decision.