My name is Greg and I'm a ghost hunter. I've been ghost hunting for a few years and I'm the leader of a group called Rhode Island Paranormal and Phenomenal Entity Researchers (RIPPER). The video of the Stage Coach Tavern was taken almost two years ago around 6:00. I was out of the room at that time. I've investigated the Stage Coach many times. It holds many different spirits. The owner reported once seeing a boy running into the ladies bathroom and then disappearing. Another spirit is that of a woman sitting in the last booth in the back of the room. In the video you first see a shadow floating by one of the pictures. Then a figure of possibly a woman walking by all the way to the left of the room appears and walks toward a sealed door. A shadow follows it a few seconds after. The shades were closed so no car lights could've created this. And even if it did, car lights don't create that type of shadow. 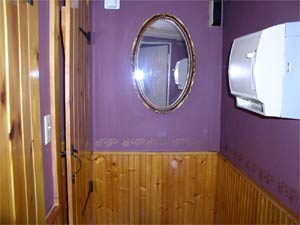