Ghostvillage is launching Spring of Culture to celebrate the emerging scene of paranormal inspired creative arts. "The shows" — paranormal reality TV — often dominate the discussion in media culture. That is only a small part of the story! Off of the TV screen is a growing community of artists who engage paranormal themes (ghosts, paranormal investigation, and other supernatural elements) in web cartoons, comics, tarot card art, and in other distinctive outlets. Plus, some cast members from "the shows" are doing creative stuff in their free time. Consider Spring of Culture as an online Festive of the Haunted Arts — and only at Ghostvillage!

This week, Deonna Kelli Sayed speaks with Terri J. Garofalo, the creator of the online, daily comic, Entities R Us. Terri has developed quite a following of enthusiasts, from paranormal reality TV fans to the cast members themselves (who have found their way into Entities as a guest draw). The comic features the daily adventures of a paranormal investigative team filled with colorful, creative charaters. One element of the comic is in presenting the perspective of the ghosts doing the hauntings! Terri is a Ghostvillage friend, and has featured Ghostvillage Mayor, Jeff Belanger, in the comic! Her toon provides humor, as well as stylish, comedic commentary on paranormal pop culture.

Who is Terri J. Garofalo, the artist/cartoonist? 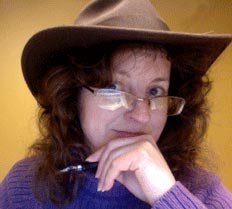 I'm a regular hominid just like the rest of you, except I've been cursed with the dreaded disease: creativity. I draw and write the paranormal daily webcomic Entities-R-Us. I am an illustrator, graphic designer and wordsmith. Yes, I investigate ghosts.

At what point did your interest in the paranormal merge with your art?

I think the art merged with the paranormal. I decided to become a paranormal investigator after I launched the comic. Prior to this, I had many paranormal and psychic experiences to inspire the cartoon. My spiritual journey continues to feed the direction of Entities. Now investigations become part of the fabric of content for the comic strip.

Tell us how the world of Entities-R-Us came about.

For many years I have created comic strips. This one evolved out of one called "In Spirit," where a skeptic moved into a haunted trailer. He calls in Entities-R-Us, Ghost Hunters to help. They were so hilarious, the paranormal guys ran away with the strip, so I offered 'em their own seriesÉ

Many paranormally inspired artists feature strong female characters. You have a few in your comic, notable the Boom Boom Buxom that appears to be satirical of how women are featured on TV. Moreover, it seems that your guy characters sometimes poke fun at male images featured in the media, as well. Do you agree with this? Are you deliberately trying to be satirical?

Historically, I have always steered away from female characters. In the past, I had trouble writing for them. I tend to be a little crunchy…Also, I am not a fan of stereotypical women, especially when I see them in reality playing that persona. Some women feel the need to be that way to be accepted. God forbid you try to pigeonhole me into that genreÉ someone is bound to get hurt! HA!

Erna was the original female. She is a bit like me in my "hippie" attire, though better at being relaxed and "zen" about things. She fits in with the boys without disturbing the peace. Vera showed up and immediately began to create tension. She is angrierand opinionated, like me in my 20s. Recently, I added Boom Boom. She grew out of increasing commentary the paranormal TV industry was filling their docket with "hot babes" for ratings. I'm not one to say it's true or not, I don't focus on it. I did choose to flip the character from the usual "dumb blond" image into a learned, capable person. I am curious to see if anyone can look past her huge "rack" and really see who she is. I think a lot of attractive women actually suffer for it. I'm glad I don't look like a seductress; it would really screw up what I want to do in this world. For the record, I do "clean up well."

Do you feel women experience the paranormal differently than men?

Entities is a daily comic strip, just like the newspaper comics. I still draw it the old fashioned way with quill pen and ink. The dailies are black and white, Sundays in color. It works on a gag basis for the most part. Sometimes there is a storyline, but often it's just a good joke. Entities is a little like Scooby Doo matured and finding ACTUAL paranormal evidence, not solving crimes of the living. It is often written from the ghost's perspective, something I'm passionate about. Spirits are people too. Carl and Thor will show you that. Thor has his own Facebook fan page, he definitely has an opinion…several.

How do you get into the "world of the ghost"?

Just like you would get into the world of your best friend you can enter the world of ghost by having a chat. They can hear you. If you can be really quiet, you might hear them. Otherwise, get out your recorder.

Comic-wise, you draw energy. They exist where my living characters do, except they do not have fully drawn bodies, just a gesture or squiggle and some clever PhotoShopping. It took me a while to sort that out…I drew a lot of screwy ghosts at first.

You sometimes showcase paranormal reality TV cast members. How did the "guest draw" emerge, and what has been the response from those featured in Entities-R-Us?

The Guest Draw came out of an encounter with Brian Harnois on Twitter. I jokingly ask him if he would like to "guest star" in my comic strip. He thought it was a hot idea. So, I drew him in. People liked it. So, I began to ask various celebs if I could draw them. I prefer to do this with their okay, as I don't think it's appropriate not to have permission. However, I have relaxed that to some extent because of fan requests. Many celebs contact me asking to be drawn. I even draw regular paranormal groups or people who are not famous occasionally. Everyone is important to me. Besides, it's the joke that carries the comic. Fans just love this concept, so I keep doing it. For some reason they want more and more of Ghost Adventure's Zak Bagans to show up in Entities. Josh Gates is another huge fan favorite. Jeff Belanger should be proud. I sold a print of his Guest Draw to someone in New Zealand. He must be huge thereÉ Over all, most of the people I draw really enjoy it. People like Zak Bagans, Ryan Buell and Josh Gates are fans. Most of Ghost Hunters International are Entities-R-Us supporters.

What personalities inspired you as an artist?

This could be a large laundry list…Depends on the genre. Comic-wise: I would have to say Charles Shultz and Peanuts gave me the desire to create a comic strip. Berke Breathed took Bloom County to the edge with every cartoon; his drawing was fantastic. The Far Side's humor was spot on. Writer-wise: Kurt Vonnegut's ability to tie in weird story threads and spin them into separate novels is genius. It doesn't hurt his sarcasm is deep and dark either. Tom Bodett is wonderful with appreciating character in his novels. Film-wise: Monty Python is just awesome. I'll never tire of watching their skits and movies. Art/illustration-wise: One of the best illustrators ever is Ralph Steadman who drew or Gonzo, journalist Hunter S. Thompson (another great writer). I love and appreciate all forms of art from minimalism to cave drawings. If it shows me something I've never seen before, then it's great art, the more innovative the better.

Where do you see Entities-R-Us going in the future, and what are your plans as an artist?

I would like to see Entities-R-Us become a syndicated cartoon…or at least have the following of what a popular syndicated cartoon would have in the heyday of such things. I also want to see it become an animated series.

Currently, I am working on my Masters Degree in Media Design. Once I reach a critical point with that, I want to put some serious energy into transforming Entities into an interactive website.