It is with no surprise that one can find documentation of the curiosities of what lingers beyond the human realm in the skies and our history shows us the many ways we as a culture have tried to explain the unknown that lingers above us in the heavens. From sketches in the cave dwellings of the Baian-Kara-Ula Mountains on the border that divides China and Tibet, to the stories of lore and myth that surround the heavens dating back as far as the first human man one is left with open-ended stories of creatures that seem to watch down from above. The early Mesopotamian culture described those lurking in the clouds above as the “watchers” of the four star constellation. Nearly as old as 3000 B.C.E., the Mesopotamian people, referred to as the Stellar Cults of Mesopotamia, were telling tales of “royal” Stars, known as Lords, who guarded the four quadrants of the Earth and looked down on man with a judging eye. 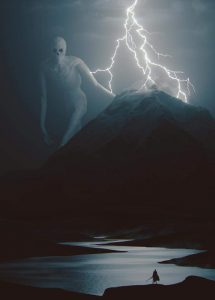 Though it is not hard to accept that ancient cultures would link lore to the twinkling stars above and grant the stars powers as their correlations and movement obviously linked to our seasons, but it is more interesting to note the evolution of the ‘Watchers.’ As more and more astrology is used within human culture, the lore of the Grigori, Latin for ‘watchers,’ increases and expands. Aside from the Sumerian and Mesopotamian views of the Grigori being associated with the four royal stars, the Wiccan and Italian Cults associated the Grigori with the four elements of nature. Earth, Air, Fire, and Water were all utilized heavily in spirituality and manifestation of the soul and the ‘watchers’ were called upon for their assistance as they were seen as mid-beings between the worlds and had power to open portals to the spiritual realm. The power of the Grigori had transcended regions of land and large expansions of time and still held strong to an inherent belief that they are indeed powerful beings found in the skies and within our environment, but yet transcend the mere human state. Regardless of the culture that is depicting them, their reoccurring theme is that they dwell in the stars and seem to be much more powerful and god-like than man.

It was later that the Greeks altered the lore of the Grigori in their own unique way and downsized the beings from Deities and royal lords to mere gods of the four winds. The astrology seemed to have been removed from their tale momentarily and the watcher was a mystical being that lurked in every breath. It was then the evolution of the Grigori fell into the hands of the Christian theologians and the Hebrew sects. From gods of the four winds, the Grigori was now being organized into an Archangel hierarchy that was recognized as having negative connotation as Satan was after all the god of the ‘air’ and associated with a star (Isiah 14: 12 14). According to the Hebrew text, the Watchers in their almost 200 numbers, were ruled over by four great Watchers known as Michael, Gabriel, Raphael, and Auriel. It was by leadership and hierarchy that the Grigori were sent to Earth to help teach mankind justice and moral law. In the Old Testament of the Bible we know today, there is a reference made to the Irin, or Watchers, which appear to be an order of angels (Daniel 4: 13 17). According to Hebrew text, the Irin were a high order of angels that were associated with the high Judgment Council of the Heavenly Courts. Today our Christian Bible has removed much of the Apocryphal Books of Enoch and Jubilees, wherein the Watchers are described in detail and their divine purpose is illustrated.

So many names for such elusive creatures, or are they? Old Ones, Dread Lords, Outer Spaces, The Shining Ones, Star Gods, Irin, The Watchers, Grigori… and many more names are used to describe these power entities documented to have a hand in mankind from the earliest days of old. Within the paranormal there are many researchers trying to determine the origin, the purpose and most importantly the power of the Grigori and to illuminate this censored and dark story of our past. Are the Grigori ancient Annunaki aliens or are they perhaps a rendition of the incubus or other dark demons? Could the Watchers be the “Mothman” phenomenon or perhaps another species of man altogether? Science, spirituality and skeptics alike can think what they want and read the countless renditions of the Grigori and Nephilim stories but religion aside, the documentation of their existence is hard to discount completely. From the Dead Sea Scrolls to cave drawings the Grigori have made a large imprint in modern mankind and the stories of old and yet remain just as elusive as they have always been, lingering between dimensions and looking down on us from above.