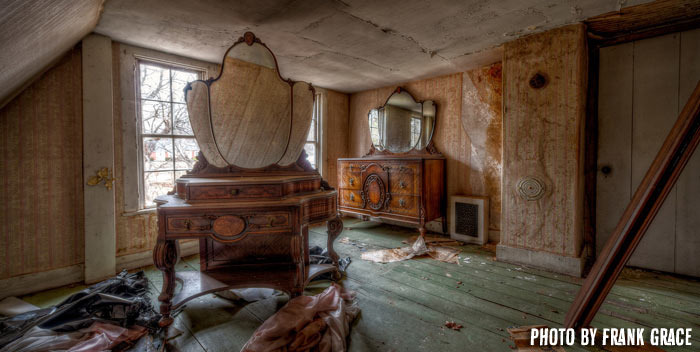 We moved into a house in Springfield, Ohio, in August of 2008. We moved from an apartment on Northern and at the time had a daughter that had just turned one, and I was 4 months pregnant with our oldest son, and so we needed a bigger house. Anyone that knows anything about the houses on Madison Avenue know they are huge, even though we were moving into a duplex. We were beyond excited. The house was beautiful and HUGE! Compared to our little tiny one-bedroom apartment, not to mention the room for our daughter to have her own room, and our baby boy could have a nursery. The house was in between Limestone Street and Elm, close to Littleton and Rue Funeral Home.

I never noticed anything wrong with the house when I looked at it five-plus times before we were approved and began moving our things in except that in the master bedroom there was written on the floor “you will be missed.” I called the realtor and asked what was up with that and she brushed it off, and insisted that no one had ever died in the house (which was a lie and she knew it). We finally got the house ready enough to begin sleeping in the house. The very first night we were sleeping on just our mattress on the floor. We hadn’t pieced our entire bedroom suite together, so the mattress was just kind of tossed on the floor.

That first night was awful! I remember staring at the archway that was in the master bedroom the entire night, and when I could fall asleep I would doze off and wake back up staring at it again. So I ended up flipping to the end of the bed where I was faced away from it, and then I ended up watching down the hallway and staring at the attic door, which was right off our bedroom door. I told my husband about it the next morning and he doesn’t believe in spirits or ghosts or anything like that, so he brushed it off as being in a new house and of course the old, Well you’re pregnant so it’s harder for you to sleep in the summer…

After the first night, I can still feel how bad it was… Everything got ten-times worse. I eventually got petrified of that house. I knew something was wrong, and finally my neighbor came over and explained it all. He explained that several deaths had occurred, and the most recent to that time was in 2004. A girl had been poisoned by her aunt and she overdosed and was found at the bottom of the steps. Two men had also died on the premises many years before then. One of which was seen standing below the archway and in the attic doorway. My daughter started talking to this little girl (I can’t remember the girl’s name, but it was not so much a name as it was a color). I would clean her room and five minutes later I’d hear a loud crash (we had hardwood floors just in the bedrooms) and would scold her for knocking her books and toys back down off the shelf. But she would blame it on the little girl. If I’m not mistaken, sometimes she called her Blue, and later as she got older she called her Emma. It was more than just thumps and taps.

I ended up having to call the Springfield Police Department one day because I had a tote of shoes in my bedroom, and where it was had hardwood floors, and it was right above the living room. I heard what sounded like someone pushing the tote across the floor and ramming it into the wall. I called them and they searched the house and there was nothing of course. The one police officer before he left explained to me that the house had a “history” and didn’t know if I believed in that kind of thing, but gave me a number to contact so I did. A group came to my house from Kent and was there maybe two hours, and ran from the upstairs out of the house. The second group I contacted was more helpful. They were able to capture voices and videos of several things. One of which was my daughter’s toys moving and going off on their own, and her getting shoved out of her bed. I have several links to these videos and recordings. I don’t think I can write much more. I just looked up and noticed how much I’ve already written. However, I will say, I feel sorry for anyone that is lied to like I was and has to live in that house. I don’t live in Springfield anymore, I moved back down south thank Goodness! This house was a curse, it IS a curse. As are many in Springfield.