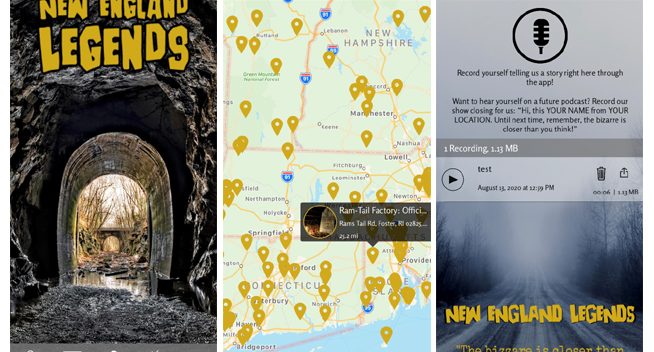 App is the first to include an interactive map with over 150 stories and locales, many of which users can explore and visit from a socially safe distance.

SPRINGFIELD, Mass. – August 24, 2020 – The New England Legends television series and podcast today announced the launch of its new, free mobile app. The New England Legends app features a feed to all of its weekly podcast episodes, a way to report new story leads with the producers through text, email, and even voice memos, plus an interactive map of New England featuring pins to every story covered so far. Each pin offers a link to that location’s podcast episode, plus driving directions for people who want to see the story for themselves. The app is now available for free download on the Google Play and Apple App Stores.

Since 2013, New England Legends has covered hundreds of strange but true stories related to New England folklore and history on its PBS and Amazon Prime television series and weekly podcast. Whether ghostly tales, monsters, stories of out-of-this-world close encounters, or the just plain odd, New England Legends is on a mission to chronicle every one of them.

“New England Legends is more than just a television series and weekly podcast,” said host, writer, and producer, Jeff Belanger. “It’s a movement. So many of our story leads are crowd-sourced at this point. People hear our weekly podcast, or see our television series, and then reach out to tell us about the strange stories from their hometowns. Quite often, those leads turn into future episodes. This mobile app is the next phase in interconnecting our community of legend-seekers. We’re building something big here.”

“We live in a time when our towns and communities are losing their identity as they become homogenized with chain stores and strip malls,” said New England Legends podcast co-host and producer Ray Auger. “But these legends are unique and local. They make each town different than any other place on earth. They’re the stories we may tell around a campfire, but more than anything they connect us to each other and to our history.”

The New England Legends app will be updated weekly with new pins, podcast episodes, and content, enabling users to explore the region and celebrate the strange history and oddities that make New England special.

“Forest City Marketing was tasked with turning the New England Legends podcast and brand into an interactive and fun mobile app,” said Lauren Middleton, CEO of Forest City Marketing. “Fans of the podcast and television series always want to check out these stories for themselves, so the app offers a way to see how close they are to a story, a link to hear the podcast episode on that location, and a means to send in soundbites and leads for future episodes.”

About New England Legends
In 2013, New England Legends began as an independent television program created and produced by author Jeff Belanger and PBS television producer Tony Dunne. Since then, the award-winning, Emmy-nominated series has grown into a Web site, a weekly podcast, an active Facebook community of legend hunters, a mobile app, and a movement to chronicle every legend in New England one story at a time. Visit the Web site at: ournewenglandlegends.com.

Download the App
Search for “New England Legends” or find it on the Apple App Store here: https://apps.apple.com/us/app/new-england-legends/id1527121148 and the Google Play Store here: https://play.google.com/store/apps/details?id=com.app_newenglandlegends312.layout