Ghostvillage has always provided insightful information on haunted sites. In fact, Ghostvillage vaults are so rich with spooky lore that Jeff Belanger wrote a best selling book from the archives. He is currently working on a new edition of that book, The World's Most Haunted Places: From the Secret Files of Ghostvillage.com, to be out in the September.

While Ghostvillage continues to offer readers information on personal encounters and ghost related topics, many paranormal teams around the US (and the world) are discovering awesome new haunts. Ghostvillage will share insights about these newly emerging spooky sites. One does not have to believe in ghosts to appreciate how public paranormal interest can benefit a historic location. After all, these places and their spirit inhabitants are the real "paracelebrities!"

Ghostvillage starts with one historic home dear to me: Korner's Folly , aptly named America's Strangest House. A chapter from my forthcoming book, Paranormal Obsession: America's Fascination with Ghosts, Hauntings, Spooks & Spirits, looks at how paranormal interest has changed the way the public experiences this whimsical house museum. Below is an article about the history – and the spirits – behind this enchanting home.

On Main Street in Kernersville, North Carolina sits one of the strangest houses in America: Korner's Folly. 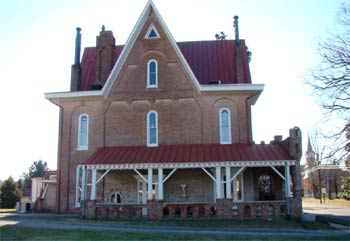 The home spans over seven floors and 22 rooms, with no doorway, window or hallway alike. Over 130 stairs are throughout the property. All steps lead to Cupid's Park on the top floor, which is considered to be America's first community theater. The home is imaginative in nature, very much like a Victorian Willa Wonka estate. Jule Korner started construction on the home in 1878 and deliberately created the house to showcase his art, furniture, and interior design catalog.

Mr. Korner built the home to be a visual experience. Little did he know that in 2009, the Korner's Folly experience would include little girl ghosts and other wonders.

The home was constructed originally as a bachelor's pad. A relative made fun of its quirky design and dubbed it "Korner's Folly" intending to insult. Jule, a genius with a sense of humor, liked the jab and christened it as such. When he married his wife, Polly Alice, she insisted that they remain in the charming home.

Korner's Folly bustled with their two children, in-house artists, musicians, Aunt Dealy the governess, and a staff. The Korners were strong supporters of the arts and ran Kernersville's first public library out of a small room on the first floor. They also hosted the Junior Lyceum where local children performed Shakespeare. Cupid's Park was turned into a full theater with a stage, a small orchestra area and room for a crowd. The Folly was a happy home and the served as the town's artistic and social hub.

Today, architects wonder at Jule Korner's creative genius regarding the home's design and concept. The entire site is a work of art. 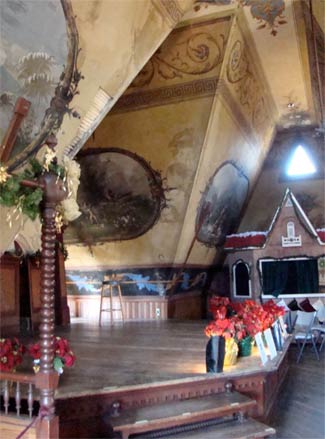 Mr. Korner died in the master bedroom on Thanksgiving Day in 1924. Polly Alice passed away ten years later. Korner's Folly fell into disrepair and remained vacant for years. Twenty-six local families saved the home from demolition. Today, the location is managed by the non-profit Korner's Folly Foundation and is open for public tours, private events, and meetings.

And, of course, it is open for paranormal investigation.

Volunteers say that they have never experienced anything unusual, although some have commented that they "always feel observed" while in the home. Paranormal investigators, however, have uncovered a seemingly intellectual, playful spirit layer to Korner's Folly.

While volunteers may not experience activity, local residents have long suggested Korner's Folly housed more than history. One Kernersville resident shared with me how his grandmother used to clean the home during its vacant years. On one occasion, she distinctly heard footsteps descending the staircase even though she verified that no one else was inside.

Kernersville community theater actors often use Cupid's Park for rehearsal. They have reported that lights in the theater mysteriously come back on after being turned off. Upon discovering this, the house has to be unlocked and someone must walk seven lights of stairs to turn the lights off – again!

A technician was working on the air-conditioning unit in Cupid's Park when something tapped three times on his hat's brim. He was so startled that he abandoned his tools and never returned. Interestingly, a male investigator during a Haunted North Carolina investigation experienced a similar incident. While on stage, his shoulder was tapped three times! We measured a 10 degree surface temperature difference between that area and the rest of his back. The place where he had been touched was cooler. This investigator was unaware that another person had experienced a similar incident in the same location. 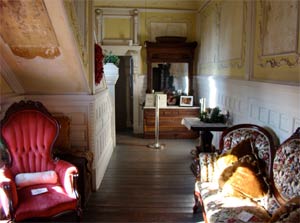 One local resident insists that she often sees a little girl standing on the front porch late in the evening. I have lectured several times at this property, and occasionally someone in the audience will tell me that they see a little girl on stage.

There was a short period when the home functioned as a funeral parlor and, at another time, an antique store. There are reports that employees would open the antique store in the morning to find the furniture rearranged. While no investigator has experienced this particular phenomenon, it is interesting to note that 80% of all furnishings currently in the home are original and mostly designed by Jule Korner himself. Likewise, he was a rather particular when it came to interior design. Perhaps Mr. Korner was unhappy with the decorating tastes.

The house is open for reputable paranormal investigation groups. It seems to be consistently active; all teams who have conducted investigations have captured EVP.

I was part of the first investigation in 2009 conducted by SPARS. Several strong EVP and personal experiences were documented. The property encouraged us to hold a press conference to announce the findings due to the large amount of evidence collected during that initial investigation. (Note: it is unusual to obtain a lot of evidence from any one investigation.) One of the most distinctive EVP samples captured was in the Children's Play Room of a little girl saying "peek-a-boo." Interestingly, two digital audio devices shut off just before the only working device caught the EVP. Likewise, a light anomaly was recorded on IR cameras in the area at that same time.

I have personally obtained EVP in the middle of the day and in numerous locations throughout the house. One was caught in the Children's Play Room and coincided with an EMF spike and one digital audio device failure. The working audio device recorded a male voice saying "haunted." This was in response to me jokingly requesting for new evidence to present at an upcoming public lecture.

Other teams have also captured light anomalies and other phenomena. North Carolina Paranormal Society filmed a light anomaly during their time in the theater (watch around the 13 second mark).

A different team recorded very bright sphere that glowed from within. This sphere seemed to follow an investigator around while he was in one corner of the room (the investigator was oblivious at the time to the anomaly). The light literally seemed to mimic the investigator; it stopped when he stopped! One is always careful to avoid using orbs as evidence, but this particular instance was something a bit beyond dust spores. However, it is difficult to suggest that it was a ghost or spirit.

The home has erratic EMF readings due to wiring and other environmental issues. However, there is one particular area where we often receive direct-response EMF. In fact, this has occurred during private investigation and public ghost hunts.

Some visitors also feel that they have recorded EVP while touring the home. One local resident was alone in the theater and recorded a male voice responding to her questions. Surprisingly, I have also captured EVP in the outhouse, and recovered a similar voice two hours later inside the home in the foyer.

Most teams who investigate feel there are three spirits or energies present: a man, woman, and child. Investigators also suggest that they have captured both intelligent and residual (place memory) EVP.

Korner's Folly is open to paranormal investigations. The site does ask for a donation to support Operation Restoration, the campaign aimed to raise money for preservation efforts. As Korner's Folly is a non-profit institution, teams can request a receipt and the donation is tax-deductible.

The local community really enjoys having such a landmark on their Main Street. Jule Korner's granddaughter, Polly Wolfe Korner, once commented that her granddaddy would be "thrilled to know" his masterpiece now includes ghosts!

The site is open for self-guided and group tours, as well as private events. Visit Korner's Folly for more information.