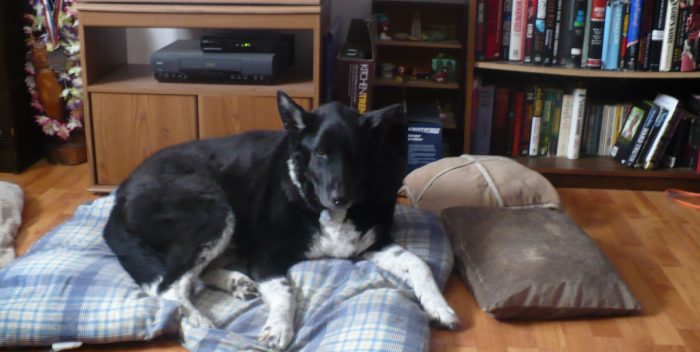 My dog, Monty, died in my arms on the 11 April, 2010 of heart failure at the age of 11. He was my best friend and traveled everywhere with me when I conducted base and ship inspections. I had numerous pictures of him and I wanted to make a CD of them and forward it to the person from the rescue organization who let me adopt him. Monty was a German Shepherd/Border Collie cross.

I copied all those pictures from the computer and remembered I had taken a picture of Monty a few days before (pictured above), and it was still on the disk in my camera. I took out the disk and inserted it the computer to download. There were a total of 63 pictures on the disk of which one was of Monty. When the disk was downloaded, I checked the destination file and there were 63 pictures of Monty, all the same picture.

I reloaded the disk and downloaded it again to another destination file; and this time all pictures downloaded correctly. I kept the original destination file as-is. This happened the day after Monty died and I believe it was his way of asking me to not forget him. I kept a copy of that picture in my wallet ever since.