On August 6,2004, my mother passed. I was traveling on the road from Milton, Florida to Salem, Virginia and I stopped along the way right outside of Atlanta, Georgia to call and see how my mom was doing.

My nephew, Jason (my sister's son) told me that her oxygen level was down almost to 43, and it would not be long before she passes on. I asked if she responds to voices and Jason said she did. He told me that he would hold the phone right up to her ear — he told me to talk loud which I did.

I told her that I loved her very much and will see her on the other side. I know that she heard me because Jason told me that she turned her head around to look for me by her bedside.

I told Jason that I would be there as soon as possible. I stop again at the South Carolina state line and called, but my Aunt Janice, one of my Mother's sisters, answered the phone this time. I asked how mom was doing and she told me that my mother had just passed. I felt bad because I wasn't there by her side, but I did say goodbye in my own way.

My mom knew what I was talking about because she had seen some of my spirits that we have here on our property, and she was amazed by the pictures that I have taken.

I arrived there and will not go into full details, but the service was beautiful. But there in my Father and Mother's house was very heavy feelings of her in her room where I stayed. My father was in the hospital pretty bad off and didn't make the funeral. My Father and I talked it over, and if my mother was there she wouldn't allow him to go anywhere while he was in the hospital. Even his Doctor was going to let him out of the hospital just for the service, but he had to come back right away. So he made a choice to stay in the hospital.

A year has passed since she has left us. I was in Virginia on August 15, 2005 packing things up that my sister and father wanted me to have from my mother. Then came bad news that there was a hurricane stirring up in the Gulf of Mexico. I was watching it on the news and was worried that it might cut my trip short. At the same time I found out that my nephew Jason just got a new teaching job teaching French and German at a school over in England for the USA military kids on the base.

The Hurricane was coming closer to Milton, Florida which is 27 miles east of Pensacola so I started to pack things up in my pickup quickly and got ready to leave. My sister called her son to come over so we can get some pictures taken before I left and to remember him by.

These pictures that you see below are the one's that I took of that night. 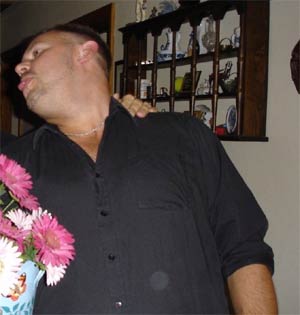 Look at the first picture of Jason — there a nice little orb — I think it was my mother who wanted to be in the picture too! 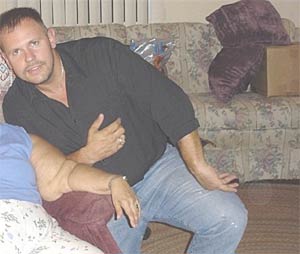 Look at the second picture on Jason's left leg and knee — another nice orb on the floor. I think it's my grandparents that had passed a few years back. Our family was very closed to one another. 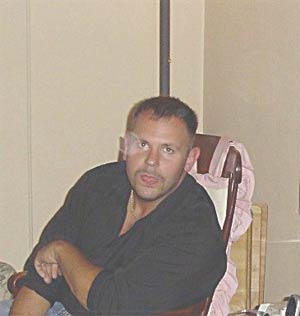 But what I think is so special is the last picture where Jason is sitting in the rocking chair which was my mother's. There is an orb on half of his cheek and the other half is in his eye which I think is my mother kissing him goodbye for the last time.

Look at the small orb in his hair and that could be my brother, Bobby — he died on my birthday, July 20,1976. Plus above his head is another large orb which could be my grandparents — maybe they all wanted to be in the picture too!

There wasn't any dust in the room at all, it was very clean and we don't believe in smoking in the house at all. The camera was Sony Cyber 5.1 mega pixels which has the lens made by Carl Zeiss from Germany.