As a forensic psychologist who specializes in language, I am always interested in the ‘witch’ this time of year. As Halloween icons show their presence in the Target check-out isles, being a witch isn’t such a bad thing. A few hundred years ago and we might be beheaded or hung in the market square, but today, the modern day ‘witch’ is almost idolized by the masses. Just like the monster obsession that surprised the characters in the famous Adam Sandler movie, Transylvania, being a monster in this modern day isn’t so taboo. However, what does one think when they think, “witch?” Your belief system, culture, language, movie preference will mold this. Are we fearful or accepting of the witch and how does this influence those people who participate in more naturalist religions that are sometimes mistaken as “witches” of witchcraft? Pagan, Wiccan, Satanism, Roma, Sini, and so many other spiritual movements that include the shaman-like figure that uses Mother Nature to heal and manipulate energy. Webster’s Dictionary says that a witch is, “a woman thought to have evil magic powers. Witches are popularly depicted as wearing a black cloak and pointed hat, and flying on a broomstick (Dictionary, 2014).” For some, the image of Sandra Bullock or Elizabeth Montgomery may come to mind, while others perhaps feel more fear-induced anxiety of demons or dark magic; a voodoo priestess witch of some kind. It’s true, there are many images, definitions and belief systems built around the modern witch but who is the “modern witch” today?

I interviewed a few modern witches and linked to their sites to learn more. Some come from cultures of Satanism while others have backgrounds of Naturalism, Wiccan, Egyptian cultures. At the end of this interview segment, I include some of my own modern day rituals and inclusions into my own spiritual witchcraft.

1. Shae Moyers with Phoenix Coaching & Consulting who stated that she was a, “Priestess, Medium, Intuitive who celebrates the new and full moons, the sabbats and who keeps a circle. The Phoenix.”

2. Adrienne Magee in Kansas City openly admitted, “I do consider myself a Witch, and a daughter of a witch, which to my family means ‘wise person,’ someone who knows the natural patterns and movements of the world.” Her use of stones, herbs, teas, energy, and manipulation of patterns was fascinating to me. Having known Adrienne since early grade school, seeing her intuition grow has been inspiring.

3. A more ancestral witch, Jessica Jones, is a proclaimed Celtic Polytheist, an inherited religion dating back to Ireland. “I have four fire festivals – Samhain being the most sacred in my family. My goddess is Brigid. Other members of my family work with different deities but deities are not the focus of our religion. It’s more about the cycle of the seasons, light and dark, life and death, growth and harvest. Ancestor ‘worship’ is very, very important.”

My heritage is mixed in a few different spiritualties as well as some strict Southern Baptism. Cherokee Natives, Sinti lines dating through Dachau and German/Irish/Welsh immigration stories. Lots of amazing stories, recipes, rituals, beliefs and evolutions in belief. My dad’s family became terribly Christian and through his parents’ devotion, I learned the ways of the Southern Baptist. I feel guilt and deal with duality that includes an evil void. A thought, a seed of fear, against demons. However, my mother’s intuition and guidance was more natural and spiritual in nature. Though she had Christian influences as well, she taught a lot of spirituality through divination, profiling, music, gardening, moon cycles, social gatherings, hosting, spells, omens, and through daily life. She gave lots of personality to everything and through that I adopted the connection to the Sinti lifestyle. The beliefs in music, the power of self-power and family, the use of a tribe and self-ethics, anti-politics and language. I have utilized a lot of Wiccan influence in my gardening and use of stones, energy, color therapy and spells. Candles, incense, oils, enhancing the senses has always been a natural devotion to calmness. Creating a sacred space has always been a priority, regardless of where. 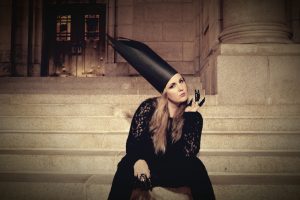 I remember practicing divination as a teenage girl and having rumors spread, I was a “witch.” Only during October was it cool and sometimes even meant I got invited to an upper classman party. I was the “bad girl” and otherwise non-Halloween times of the year I was a bit taboo. Later, after the cliques dissolved and social media brought old classmates to the surface, many contacted me for psychic readings and now have become devoted friends and clients. Understanding self, connection to others and energy and how quantum theory and science is validating spirituality is fascinating. The thick culture of song, spell and mindfulness. Perhaps that’s why I keep a “coven,” a group of close women, who I look to for support and advice. We encourage, protect, propel and inspire each other. In a world where most religions are unabashedly covering women and combating sexism, being a witch is a sacred space to celebrate being a woman. I’m proudly a witch, both when it’s Halloween season and its popular and also when the lifestyle becomes more a secret whisper.