Photo courtesy of Lake Claremont Press
When I was a child, like many of my peers, I hated school. Luckily for me, my mother went back to work as a Chicago Public School teacher when I began kindergarten, and my father took early retirement from the Chicago Police Department to care for me before and after the half-day school program. My father had hated school, too. Moreover, he loved my company and preferred to have me spend my days with him than with my teachers and classmates at St. Benedict Elementary School, not far from Wrigley Field. And so I rarely went. When the inevitable inquiries came from teachers, the school secretary and, later, the principal, Adalbert Stanislaus Bielski — gruff, loud, and more than a bit intimidating — would scare them off for days or weeks at a time, with my mom none the wiser.

I still have the report cards from those days: 14, 27, 45 days and more absent. And I smile when I remember the distinctive education that my dad provided on those days. For they were spent decidedly afoot; indeed, I credit my dad with introducing me to the Chicago I grew to adore, as well as to the city’s most famous phantom, Resurrection Mary. Most researchers, most ghost hunters, most documenters of her life and afterlife have met the elusive Mary in magazine articles, newspaper clippings, or – classically — around a campfire in hushed tones. I met her on a barstool at the tender age of five, drinking a Shirley Temple at Chet’s Melody Lounge at 11 AM on a Wednesday morning, when I was supposed to have been in school.

I think this is why, twenty-five years later, I became enchanted by one particular incarnation of our most precious Rez Mary: a 12-year-old South side girl named Anna Norkus. Like me, Anna was also a second-generation Eastern European American Chicagoan. Like me, she loved life and music and dancing. And, from a very young age, Anna was (like me) her father’s best friend. 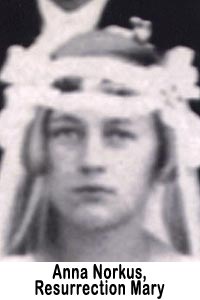 The connection of Anna Norkus to Resurrection Mary was solidified through the rigorous research of Frank Andrejasich of Summit, Illinois. Frank wrote me a lovely letter after publication of my first book, Chicago Haunts, in the Fall of 1997, and told me the story of his obsession, one that would soon become my own and lasting. I met with Frank and his wife one Winter morning, in their bungalow in the town of Summit, at the edge of the great sprawling Southwest side of Chicago, one of the most haunted regions on earth, and he told me the story of how he came to know the true identity of Chicago’s most beloved ghost.

In August of 1994, Andrejasich’s brother had sent Frank a newspaper clipping telling the tale of Resurrection Mary, and, asking around at coffee after Mass one Sunday, Frank found that there were many local versions of the famous tale — and many “candidates” for the role — especially at his own St. Joseph parish, in the heart of Resurrection Mary country. Andrejasich was startled by the prevalence of the story in local memory — and by the opinionated responses to his often-asked question: who was she?

As it turned out, one of Frank’s church buddies was a man named Jake Palus, who turned out to be the younger brother of the now-infamous Jerry Palus. Jerry is believed by many hard-core Mary researchers to have been the phantom’s first encounter; till the day he died, Jerry claimed to have danced with her “all night” in 1936 at the old Liberty Grove and Hall ballroom on 47th street, in the storied Brighton Park neighborhood.

Claire and Mark Rudnicki — friends, neighbors, and former St. Joseph parishioners — told Andrejasich that Resurrection Mary could be traced to the 1940s, when a young Polish girl crashed near Resurrection Cemetery at around 1:20 a.m. after she took the family car to visit her boyfriend in Willow Springs. According to this version of the story, the girl was buried in a term grave at Resurrection. Appropriately, Andrejasich wonders why a couple that owned a car in the 1940s would need to bury their daughter in a term grave.

Adding to the explanations was another parishioner, Ray VanOrt, who tells how he and his bride-to-be were the first witnesses at the scene of an accident on Archer in 1936, when a black Model A sedan collided with a wide-bed farm truck at 1:30 in the morning, while both witnesses and victims were traveling home from the old Oh Henry Ballroom, now the Willowbrook. According to VanOrt, of the two couples in the car, only one person survived, a girl who was badly hurt. Both men and another girl perished. Today, VanOrt is convinced that this was the accident that killed our would-be Resurrection Mary.

Still another parishioner told Frank that the wayward wraith was, in life, Mary Miskowski of the South side Chicago neighborhood of Bridgeport. In this narrative, Miskowski was killed crossing the street in late October in the 1930s, on her way to a Halloween party.

After pondering the variety of accounts, combing early editions of the local papers, and checking with funeral directors and cemetery managers, Andrejasich came to believe that the ghost known as Resurrection Mary is the spiritual counterpart of the youngest of all the candidates: a 12-year-old girl named, surprisingly, Anna Norkus.

Born in Cicero, Illinois in 1914, Norkus was given the name of Ona, Lithuanian for Anna. In that era, it was not the custom to christen infants with two names. But after 1918, children were baptized with a Christian name and an historic name to further pride on their main country. As a young girl, Anna’s devotion to the Blessed Mother led her to begin using the name Marija, Mary, as her middle name. By the time she neared her teenage years, Anna had grown into a vivacious girl. Blonde and slim, she loved to dance, and it was her relentless begging that convinced her father, August, Sr., to take her to a dancehall for her 13th birthday. On the evening of July 20, 1927, father and daughter set out from their Chicago home at 5421 S. Neva for the famous O Henry Ballroom, accompanied by August’s friend, William Weisner, and Weisner’s date. On their drive home, at approximately 1:30 a.m., the travelers passed Resurrection Cemetery via Archer Avenue, turning east on 71st Street and then north on Harlem to 67th Street. There, the car careened and dropped into an unseen, 25-foot-deep railroad cut. Anna was killed instantly.

After the accident, her father, August Norkus was subject to devastating verbal abuse, even being told that Anna’s death had been God’s punishment for allowing the girl to go dancing at such a young age. In reality, the blame rested with the Chicago Streets Department, who had failed to post warning signs at the site of the cut. In fact, another death, that of Adam Levinsky, occurred at the same site the night after Anna’s demise.

Between July 28th and September 29th, an inquest was held at Sobiesk’s mortuary in adjacent Argo. Heading up the five sessions was Deputy Coroner Dedrich, the case reviewed by six jurors. The DesPlaines Valley News carried the story of the inquest.

Mary Nagode described to cousin Frank Andrejasich the sad procession that left the Norkus home on a certain Friday morning: First in line was Anna’s older sister Sophie, followed by her older brother August, Jr. The pastor, altar boys, and a four-piece brass band preceded the casket, borne on a flatbed wagon with pallbearers on each side. Relatives and friends followed the grim parade for three blocks to the doors of St. Joseph’s in Summit, where Anna had made her first communion only a year before. Between the band and the priest walked Frank Andrejasich’s cousin, a terrified Mary Nagode. Mary was a friend of Anna’s who had been pressed into service as a wreath-bearer. On summer vacation, Nagode was weeding on an asparagus farm in Willow Springs when Anna’s father paid a visit to Mrs. Nagode, requesting that Mary march in his daughter’s funeral procession. At home that evening, her mother informed Mary that she had accepted the request on her behalf. The girl was deeply dismayed at the proposition. Mrs. Nagode reminded her daughter that refusal of such a request would be a sin against Roman Catholic moral living, which dictates that one must attend to the burial of the dead.

Anna was scheduled for burial in one of three newly-purchased family lots at St. Casimir Cemetery, and it is here where Andrejasich found the “if” that may have led to an infamous afterlife for Anna : as the world-famous Resurrection Mary, or as Anna called herself, Marija.

Andrejasich discovered that, at the time of Anna’s death, a man named Al Churas Jr., brother-in-law to Mary Nagode, lived across the road from the gates of Resurrection Cemetery, in a large brick bungalow that was recently torn down as part of a subdivision development. Al’s father was in charge of the gravediggers and was given the house to live in as part of his pay. In the mid-1920s, gravedigging was hard, manual labor, rewarded with low pay. Strikes were common. As Resurrection was one of the main Chicago cemeteries, the elder Churas was often sent to the cemeteries of striking gravediggers to secure the bodies of the unburied. Returning to Resurrection with a corpse in a wooden box, Churas’ duty was to bury it temporarily until the strike ended and the body could be permanently interred in the proper lot. Because of poor coffin construction and the lack of refrigeration, a body could not be kept long, except in the ground. If the strike dragged on, identification at the time of relocation could be gruesomely difficult. Thus, reasons Andrejasich, if the workers at St. Casimir were striking on that July morning in 1927, it is quite possible that young Anna Norkus was silently whisked to a temporary interment at Resurrection, and that a rapid decomposition rendered her unidentifiable at the time of exhumation. The result? A mislaid corpse and a most restless eternity, if only one is willing to believe.