Ghostvillage.com is pleased to announce a series of holiday-themed features! Our first selection is a lovely Christmas story by longtime paranormal researcher, Richard Senate. Mr. Senate was one of the first "ghost hunters" with an online presence, and was recently seen on Travel Channel's Paranormal Challenge. He remains a prolific author, investigator, and commentator.

Little Rahotep was a small mummy. His tomb in Egypt was a very poor one with no treasure. They buried him with just a jar of ointment and his cat, also mummified, named Mewfu. His tomb was so poor the grave robbers would laugh at it. It wasn't even well hidden. "Why should we waste our time robbing this tomb?" the robbers would say. "It is a foolish tomb! Let us find something better and this will not be hard." 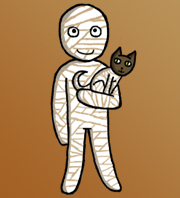 All of the other mummies were bigger than little Rahotep and because he had no gold or silver the other mummies would have nothing to do with him. "Let us go next door and try to make a friend,: said Rahotep to his cat Mewfu. He peeked out of his tomb and walked to the other tomb. "Hello, is anyone there?" he called out. Presently a musical voice came from the fine tomb. It was a haughty voice. "Who are you?" it asked.

"I am Rahotep from the tomb next door," he answered. The door opened and a grand lady mummy stepped out. "I am the princess Anksenamen," she said. "Did you bring me any gifts? I like gold. Did you bring me something made of gold?" All Rahotep had was his jar of ointment and it wasn't made of gold. "I brought you some fine ointment," answered the littlest mummy.

"It is very good ointment in a nice jar!" "Does it come in a gold jar?" asked the princess. She didn't even bother to look down at Rahpotep. "If it is not gold, silver will do." Rahotep looked at the little jar of ointment he had and offered it to the princess. "The jar is a very fine pottery one with a painting of a lady on it. It is the best I have. Please take my gift and be my friend." 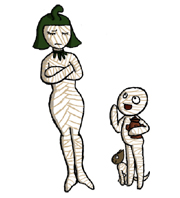 "Be gone little mummy," said the princess. "If you have no gold or silver you are not worth having as a friend. Be gone and take away your smelly ointment." With that the princess laughed and went back into her tomb, slamming the stone door closed. Rahotep bent his head low and walked back to his tomb. Mewfu purred and tried to cheer him up.

"Mewfu, No one likes me. I am not worth anything to anyone," he said. The littlest mummy sat down in front of his tomb door and rested. Mewfu sat next to him and rubbed his bandages. Just then a shadow came upon them. "Who is there?" Rahotep asked.

He saw it was a man with a beard leading a donkey. On the animal was a beautiful woman who carried a bundle in her arms tenderly. Rahotep saw it was a baby, a wonderful baby. They all looked so very tired and he could see they had traveled far. "We are out of the land of Herod the tyrant and seek a place to rest. I am Joseph and this is my wife Mary and our son." Rahotep looked at the baby and saw its beautiful eyes and smiled. The baby even smiled back at him and Mewfu.

"You may stay the night in my tomb to rest. It isn't very large but it will keep you dry and warm." Rahotep opened his door and let them come in. was still holding his jar of ointment and he went to the woman Mary and presented it to her. "Please accept my gift," he said. "The ointment will protect the baby from the hot Egyptian sun." The woman smiled at him and took the jar. "Thank you," she said. Even Mewfu liked the guests, and rubbed next to the baby and purred him to sleep.

The next morning the travelers were gone. But, when Rahotep got up, his bandages fell away. His dry mummy skin was gone and now warm living skin was there. He was alive again! He called for his pet cat Mewfu and saw that had fur now and not bandages. He was alive again too! "We are alive again!" he shouted. "It is a miracle." 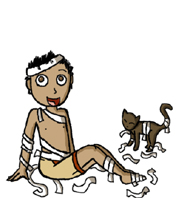 The boy, for that is what he was now, took his cat and went from the tomb and went to play with the other boys at the bank of the Nile River. From that day on Rahotep was never lonely again! The Holy Family had given them both the gift of a new life. Let us remember in our giving this Christmas that our gifts are nothing without love.

MERRY CHRISTMAS TO ALL!