This EVP is to-date the most convincing recording I have gotten simply because I can find no explanation other than the obvious. I have been dabbling with EVP recordings for about 4 months, and on this occasion decided to take a day trip to Bannack, Montana, which is a mining town that has been preserved as a state park. It has been pretty well documented that Bannack is haunted by two ghosts, one older woman and that of Dorothy Dunn who drowned while playing in Grasshopper Creek on August 4, 1916. Both of these ghosts are said to reside on the second floor of the Hotel Meade. At the time of this recording, there is no one else in the hotel at the time. I was the only visitor left on this evening and no personnel were in the hotel.

As you reach the top of the staircase, the feeling of a presence is palpable and I was actually hesitant to go over to the locked doors (they lock these doors because of supernatural events which have occurred prior). I stood silent with the digital recorder going for about 5 minutes so as not to corrupt the recording and so I could concentrate on external noises. I then walked the upstairs hallway and back to the locked doors, and in one specific area it was much colder than the rest of the upstairs. I then decided to try and egg this ghost on into talking to me so I proceeded to ask her if she is a chicken. In the recording you will hear me ask the question then you will hear a distinct giggle, then I say "I think she's a little chicken," and I believe quite clearly in a playful voice and tone she says, "little chicken from the farm," with a pronounced accent in her voice. When I played this recording back I was literally in tears. Please let me know what you think. I have attached the sound file and a picture of the hotel. 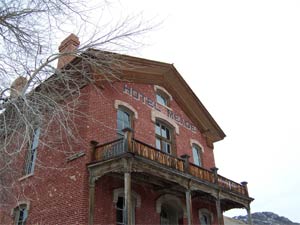