Over the past few weeks, I've stumbled across various discussions about paranormal reality TV. I think these things go in cycles – people talk about something else for a while, and then revisit the deeply philosophical, political, and often personal commentaries regarding "the shows." Such debates are almost always negative, focusing on personalities who allegedly fake evidence, misbehave, or just act stupid. Paranormal enthusiasts take profound pleasure in ruminating upon media culture. It is like having an opinion on a show turns someone into a public intellectual.

Of course, the shows are worth discussion. A new one pops up every season. Chances are you (and your neighbors) have seen at least one episode of any given show. There are positive elements to this genre as well as very legitimate criticisms.

Paranormal Reality TV is culturally significant because it is doing what no other reality TV genre has done – it is creating an unprecedented global community of enthusiasts who exist because of TV shows. This genre has formed a completely new social identity marker, that of the "paranormal investigator." (Today's investigator is a different breed from those in the past, by the way.) One does not see tens of thousands of people rushing to form Jersey Shore or Housewives of Your Local City clubs. ( This is signficant, for Jersey Shore's new season debuted with 8.8 million viewers. Paranormal reality TV doesn't enjoy those kind of numbers.)

I am a paranormal investigator with an academic background in cultural theory. I see the shows as interesting and profitable programming that provides cultural commentary on American society. Few reality TV genres offer as much insight to our collective identity as the paranormal sort.

But never mind the academic mumbo jumbo. If you are a paranormal investigator, you probably became so because you started watching one of these shows. I've conducted research by way of online anonymous surveys, and it appears the majority of today's ghost hunters geared up after 2004.

I am one of those, in fact, and I'm not embarrassed to say it. I am honored to be part of something has become a profoundly meaningful personal journey. Paranormal investigation has helped me learn a lot about myself. I've morphed into a better person in the process and I know many people who feel the same way. Kudos to the shows for getting me to my happy place.

Let me issue some disclaimers before I get too far with this. These opinions are not related to this website, my paranormal group, any political party, religion, or organization where I hold membership. They are mine alone, and based on a year's worth of research conducted for my forthcoming book, Paranormal Obsession: America's Fascination with Ghosts & Hauntings, Spooks & Spirits, which involved talking to an assortment of cast members from various shows as well as investigators from around the world.

The Responsibility of Paranormal Reality TV

I am with a paranormal group that has been on the shows, albeit before my time. They were featured on Travel Channel's Legend Hunters in 2006 and on Season Two of Ghost Hunters. I'm with a group that has been there, done that…and doesn't want to do it anymore.

Paranormal Reality TV has a job to do, and that job is not to depict investigation as it really is. The format does not allow for that. We know real investigation is boring, time consuming, and involves dynamics that will never translate into a coveted 9 p.m. Wednesday night slot.

These shows have a responsibility to create a story that resonates with viewers, and they are actually doing a very good job at that. Let us be realistic – media observers suggest that 90% or more of paranormal reality TV fans are not investigators nor are they aware of the vibrant, dynamic existence of the paranormal community. They are non-ghosting people who tune in on any given night because they find something enjoyable or meaningful in paranormal reality TV. It is a singular event that does not morph into a passionate hobby. Networks do not have any responsibility to the demographically insignificant (that 10% or less) "paranormal community" nor to adhere to any particular set of paranormal ethics.

There is no need for grassroots investigators to take offense to this. Paranormal reality TV is designed to tell a particular story. We've been inspired by it, no doubt, but it is not the only meaningful story out there.

Production companies were buzzing about this topic in the early 2000s. The tragic events of 9/11 encouraged the entertainment industry to hold off. Many felt American audiences were too raw to respond to programming about ghosts. Companies revisited this idea a year later, partly due to the success of United Kingdom's Most Haunted. A 2002 New York Times article thrust TAPS onto the radar. Production companies starting calling. It was only a matter of time before some team somewhere landed that first show. (The initial idea wasn't a reality TV show, but a dramatic series based on TAPS cases.) TAPS turned down a show option four times before joining Pilgrim Films. It is merely a matter of luck that that SyFy took on Ghost Hunters and subsequently made entertainment history.

Few expected that paranormal reality TV would take off. Certainly, no one predicted the exponential global growth of paranormal enthusiasts. Jason Hawes and Grant Wilson initially felt their show wouldn't last more than a season. Most observers forecasted the genre would soon fizzle out rather than go on to flagship ratings.

For the majority of viewers, paranormal reality TV is goodtime spooky. Investigators, that 10% or less of viewers, watch for very different reasons. We tune in because we know about a particular location or because we want to see new, cool equipment. We vicariously have our own personal experiences through those we see on TV. Investigators identify with the shows differently than other viewers — and we serve as the harshest critics.

Over the past year, I have become friends with various cast members. Yet, I no longer watch TV with any consistency. I find something annoying about the shows, in all honesty. I yell profanities at the screen only to realize that I'm literally cussing at my friends. For those who complain about paranormal reality TV, I hear ya!

However, I've reached a place where paranormal pop culture and what I do as an investigator live in two completely different spaces. The shows are like a gateway drug, and one I've recreationally used. People enter high on the idea of what they see on TV. Then, the real work of investigation, team management, and client services takes over. Some people thrive on this. Many learn new skills, develop increased self-confidence, and use this to literally change their metaphysical compasses. Others find it tedious, boring, and less glamorous than the whole TV experience. Of course, some just want to get their own show. In this regard, paranormal reality TV ultimately separates the girls from the goddesses (and the divas). 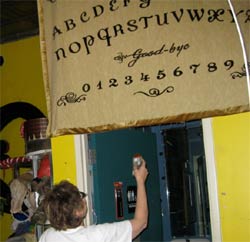 The genre, of course, is imperfect regardless of the initial feel good experience. Some of the most legitimate complaints against the shows originate from seasoned investigators. Many feel that their influences were abruptly sidelined for what is now the "lowest common denominator" of sensationalistic TV. Longtime parapsychologists and amateur investigators are partially displaced by some newbies who do more harm than good. I am personally shocked by how many new investigators do not know about the contributions of Troy Taylor, Dr. Barry Taff, Loyd Auerbach, J.B. Rhine, and other seminal researchers. [Editors note: Ghostvillage has launched a Living Legend series to highlight some of these personalities.]

Yet, on the flip side, there are now more serious, kind, and credible people in the field who quietly innovate and conduct careful work. A huge amount of cool research and meaningful investigation is taking place all over the world. Change, good and back, comes along no matter what TV show is in vogue. The challenge is to complain less and to proactively create the type of community that is most meaningful to you.

I have privately discussed these things with several cast members from different shows. Remember, most of these personalities were serious investigators prior to TV. I cannot speak on behalf of any one individual but I gather that most feel media involvement is for the greater good. There are certainly private frustrations and disappointments. Lives are irreversible changed with great personal achievement — and at great cost. For this reason, I take offense when people vagrantly attack cast members without having met them and with no knowledge of how the entertainment industry works. Constructive criticisms are far more valuable than personal assaults.

One common accusation against the shows involves alleged fraud and faked evidence. This criticism is not new. Such complaints have existed since the paranormal first entered American public culture. Fakery and misrepresentation characterized the spiritualist craze of the mid 1800s and early 1900s. Public readings and seances were popular and provide an odd historical parallel to reality TV. Despite widespread fraud, some genuine academic (scientific) work took place during that time and serves as the foundation of contemporary investigation.

At the end of the day, paranormal reality TV is not about legitimacy. It is about public perception. These shows reflect what we already believe about the paranormal, the afterlife, and function to represent our collective mythologies. They are working with common cultural goods — not groundbreaking discoveries.

Evidence is only as solid as what the public perceives it to be. What we individually experience from paranormal reality TV is based on the beliefs we put into it. With this in mind, discussions about "fraud" and "fakery" are completely subjective.

Investigators do not need TV to validate what we are doing. Our role is to validate our own work, be it legend tripping or scientific-based research. Our responsibility is to be ethical off-camera and to do no harm. The field's legacy does not fall on the shoulders of Jason, Grant, Zak, Ryan, or anyone else. That responsibility belongs to grassroots investigators. Paranormal reality TV has opened up an unprecedented cultural space around these topics and it is up to you and I to make the best use of this opportunity.

Let us enjoy and appreciate paranormal reality TV for the good it offers. It provides a meaningful hobby for thousands. A worldwide community is emerging, emboldened with new friendships and aspirations. The shows are creating opportunities for exciting research. They give us tools to tell new personal stories and to obtain unique social identities.

Most importantly, paranormal reality TV permits us to have conversations at a global level that may have never occurred in any other capacity.

Turn on your favorite show, kick up your feet, and partake of the viewing experience. Enjoy the wonderment — and then move on. Those who really dislike the shows can thwart their influence by doing positive work. Those who are inspired by the shows can honor that legacy by constantly seeking knowledge.

We may have entered the paranormal community because of paranormal reality TV, but now it is time to stop defining ourselves by it.