Note from the editor: Ghostvillage.com receives a lot of unusual emails, images, audio, and video from people around the world. Recently, Chuck Ladouceur sent us an image that is vastly different than anything we've published before. We've all heard of cases of the face of Jesus turning up in toast, tortillas, or even fogged windows, but Mr. Ladouceur makes no claim that the faces that turned up on his Staples receipt was anyone he knows (or knew). As with all images and accounts on Ghostvillage.com, this is submitted as part of the discussion, not proof of anything.

Chuck Ladouceur wrote: This is a receipt from Staples. I found it while I was doing some bookkeeping. I don't know who it is or have any idea, I just thought it was pretty interesting to see a face (actually several) on the receipt like that. It might be nothing (like a rabbit shape in the clouds) or it might be real, who knows. 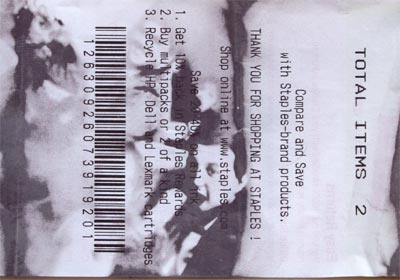