I rent a space in Massillon, Ohio, which is were my band practices. The building dates back to the 1800s and right above us is a dance studio where in the fall kids practice dance and ballet. Ever since I moved into that place (which would be about a year and a half now), very strange things have happened. (I should note I have been into the paranormal since I was a kid.) Anyhow, there are some nights where nothing will happen and other nights it's so bad you don't want to be there. I'm usually there 3 days out of the week, and at least 2 of the 3 have something going on.

I have done a lot of research on the building and I didn't find anything out of the usual — no strange deaths — nothing. Lately, at some point in the night, we will hear a man coughing really hard, almost as if he has a diseases of some sort, and it happens at same time every night.
I'm the only one who has keys for the building, so I know there's no one else there but myself and the others in my band. Other things I've experienced include: loud barking dogs, A little girl standing on the ledge of the window (outside the window), lights flickering on and off,
doors opening and closing by themselves, and a lamp shade that will rotate by itself. One time a window fell while it was open shattering all the glass in the pane — the pattern of the breakage almost made the shape of horns and a head as well.

I really don't think things like that like me being down there. I have these pictures which prove my point. (735 hp photo smart digital used) 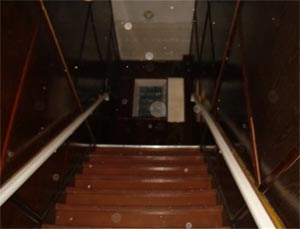 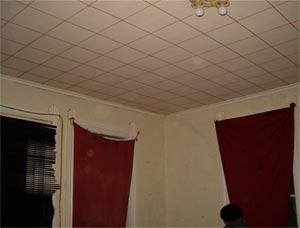 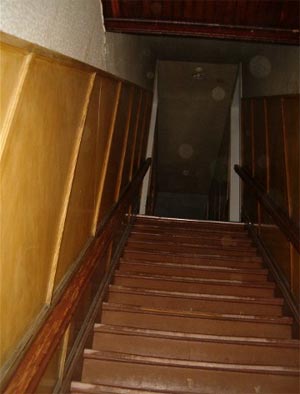 I also have another belief that it's possible for it to be a poltergeist, since I have found no history of bad things that have happened and there are at times an abundance of children there. I have heard that children are responsible for most poltergeist problems in housing so I'm not quite sure of what's going on down there. Some day I would love to find out. I just ordered an EMF meter and I'm going to be doing some investigative work with that soon.

I was wondering if anyone here had a poltergeist experience? Over all, this place makes for a very interesting night of things! Never a dull moment.

Attached to the Home of Family?