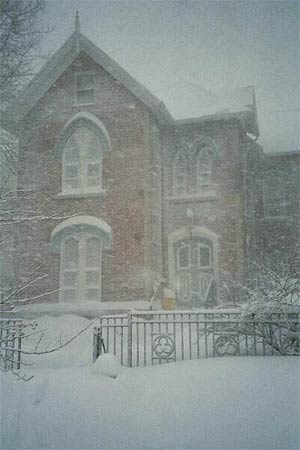 When we moved into our brick Gothic house, it seemed spooky but cool. A day hadn't gone by before we heard the first of what was a five year haunting.

We were in the library working on refinishing an old desk that was left in the house, when suddenly we heard footsteps clomp across the room above and a shut door. I went up to investigate and there was nothing up there that I could see. Since that time the hauntings became more frequent, a drywaller would not come back into the house unless I was with him. His tools kept disappearing and the bathroom faucets turned on by themselves. We never saw an apparition but we did hear whistling and talking and lights would go on and off.

There were several times I would come home from work and find my wife on the front steps too scared to go back into house. The "cat lady" who lived across the street would watch our cats when we would be out of town, she is nun who runs here own business. Well, she would hear loud noises and banging whenever we left. She said it was terrifying! The girl who rented the back apartment from us, came to me one day and asked if the house was haunted. I asked her why and she told me the radio would come on by itself and be tuned to an opera station. It is a very bazaar house, we ended up selling it because the spirit or whatever it is, started bothering the children.