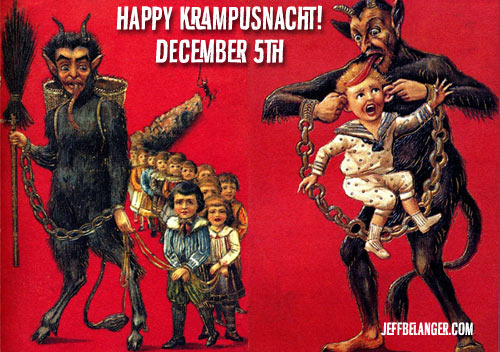 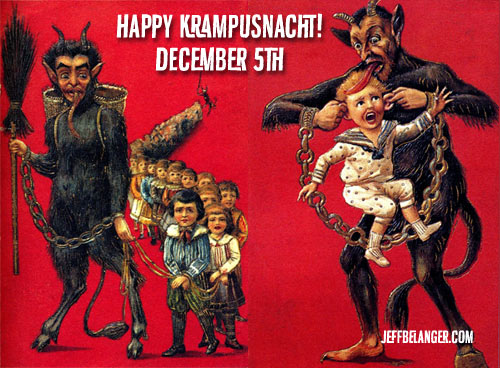 You know Dasher and Dancer, and Prancer and Vixen. And of course you know Santa Claus. But did you know Santa has a dark and deadly counterpart? His name is Krampus… and today, December 5th, is his day.

Between the 1870s and 19-teens, Krampus was very popular in Europe and parts of the United States. Though this yuletide figure originated in Germany and Austria, he quickly spread because every parent is always looking for new and innovative ways to scare their children into submission.

Saint Nicholas Day is celebrated on December 6th in many European countries, but December 5th belongs to Krampus.

Through old postcards from the turn of the century, we can see how popular this figure was.

Krampus is depicted as a horned devil creature with one regular foot and one cloven hoof. His long, red, forked tongue often hangs from his mouth surrounded by an evil grin. Over his shoulder he carries either a scratchy burlap sack or a basket, so he can stuff the naughty kids inside. In his hands are chains and a switch of sticks for beating the bad children.

When you were a kid, did you ever consider that no one you knew never really got coal or sticks in their stockings Christmas morning like people said would happen if you were bad? It’s because Krampus had already claimed the bad children and carted them away to be eaten!