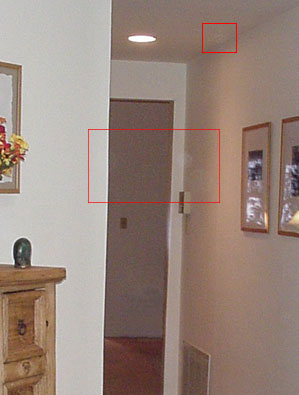 In September of 2000 my boyfriend (now husband), Brian, and I moved into a six-flat building built about 1920 on the North side of Chicago. He worked out of town so he was gone all week. I got the first inclination of something strange in the apartment the night we moved in. Brian left to return the moving truck and my friend and I were putting stuff away. She said she was going to go, and suddenly I just couldn't stand the thought of being there by myself — I just had a real uneasy feeling.

Next sign: my cat began staring into a corner in the hallway regularly, and then "batting" at invisible things there. (I know cats are weird, but he has never done this before, or since we moved out.)

Next sign: a tapered candle on my bedroom dresser began consistently falling out of its holder in the small hours of the morning (the noise scared me and my cat half to death when it banged down while we were asleep). This hasn't happened before or since we've moved out — same candle, same spot on dresser, same holder. For some stupid reason I just kept putting it back in the holder so it could happen again the next night — denial, I guess.

Next sign: a glass vase on a wooden stand (as seen in the picture, but in different location and different vase) somehow ended up behind the stand intact and upright, and all six drawers in the stand were opened at exact intervals to each other (consecutively wider up to the top of stand in a stair-step formation) and weird things stuck in the drawer (which contained CDs) like pencils and a notepad. And if anyone knows rough, Mexican pine furniture, these drawers aren't easy to open.

Brian finally stopped calling me crazy after he saw an orb-like thing float out of the bathroom and disappear. There were other things that happened, but they were more "feelings" and "seeing things." We moved after our one-year lease was up.

The picture I took of the hallway was practice for some residential photography I had to do. I think the shapes are orbs… They didn't show up in any other picture. I used a Sony Mavica (one of the older digital cameras that use the floppy disk for storage — I'm not sure of the model number) and the picture was taken on Nov. 18, 2000 at about 1:48 P.M. Everyone I show the picture to thinks I'm seeing things, but combined with my experience there, I think its proof!