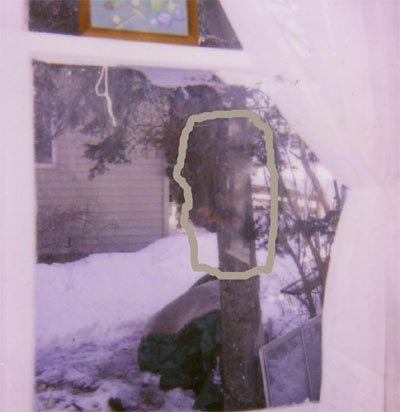 My husband and I bought a home in Clintonville, Wisconsin, and ever since we moved in, we have seen children's hand prints appear on our bathroom mirrors, porch doors, and then one day I saw a hand print appear on our porch window, so I decided to take a picture of it. The minute I took a picture of it, it felt like something jumped at me, it was a real unsettling feeling. Once the picture developed, I saw a man's face appear (I call him James). I could see his eyebrow, his chin, his eye, his breast bone, etc. It was almost like he was peeking around a dark curtain.

I also had a dream about the man I saw in the picture. One night I was sleeping, and the next thing I know, it felt like I was having an out of body experience. I was standing at the porch door, and this man had his arms extended out to me, like he had just gotten home from work, and was trying to give me a hug? I then extended my arms, and the next thing I know, I froze. I woke up shaking, I jumped out of bed, put on the light, and then I couldn't go back to sleep after. Ever since we moved into this house, I couldn't be out on the porch after dark because I could feel something watching me. We have had other experiences too. I was sleeping in our bedroom upstairs, and then I heard someone come into my room. I looked up, and I could see she was looking back at me, almost like, Who are you? And why are you in my bed? I have seen a woman I call, Madeline. She is dressed in a long white gown, and she stands at the top of our stairs. She seems like she was a beautiful woman when she was alive.

We also have a ghost kitty. I have seen him down in the basement. He is black, and he uses our cat litter box from time-to-time. We know he's using it because my daughter was downstairs one day and she came flying up the stairs. She said a ghost cat was using the litter box. She said it was a ghost cat because she could see the litter moving, and there was no cat in the box. Some people want to get ghosts out of their house, but in this house, they haven't been mean or tried to attack us, so as long as they behave, they can stay.