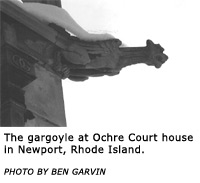 Most people think of the supernatural as a very intangible thing. Many perceive it to be an enigma that just can’t concretely be proved one way or the other. But there is proof of the supernatural all around us. While strolling through the streets of almost any city, just look up at some of the magnificent architecture and you’re bound to spot a gargoyle leering back at you.

I recently spoke with Darlene Trew Crist, author of the book American Gargoyles: Spirits in Stone. She said, "A true gargoyle is a carving that covers the drainage system of a building, but they’re much more than that. One of the reasons I like them is they are an art form that has real function as well as meaning."

In addition to gargoyles, we have grotesques, which can also be monstrous, whimsical, and frightening in design, but they do not serve a physical function like directing rainwater. Both gargoyles and grotesques have stood watch over secular and sacred buildings for many hundreds of years, but why contrast beautiful, and many times religious, architecture with intentionally horrific sculptures? History and folklore have some answers.

Gargoyles can trace their history back many thousands of years to ancient Egypt, Greece, and Rome. Terra cotta waterspouts were formed in the shapes of animals such as lions and birds to serve the physical function of running the rainwater away from the walls and foundations of buildings, and the spiritual function of protecting from evil forces.

The idea of monsters, dragons, and other creatures of mythical proportions do have a solid foundation in history. Author and researcher Adrienne Mayor theorized that monster legends date back to nomads discovering fossilized dinosaur bones in central Asia several hundred years B.C.E. Imagine stumbling upon the giant bones of a pterodactyl or a protoceratops? You may have no idea that these bones were millions of years old — just that they clearly belonged to a giant, powerful beast. From these early discoveries and with the help of folklore, griffins, monsters, and dragons may have been born.

In our conversation, Crist relayed the story of La Gargouille. La Gargouille was a scaly, fire-breathing dragon with a long neck and giant wings who lived in a cave near the river Seine in France in the seventh century C.E. As the story goes, once a year La Gargouille would come to the village of Rouen and demand a human offering. The villagers would occasionally get away with offering a prisoner, but La Gargouille’s favorite feast was a virgin maiden. The villagers quickly learned that without the sacrificial offering, the dragon would rain terror and destruction on them — spouting water on their riverboats and fire on their buildings and fields. ("Gargouille" in Old French means "throat.")

Folklore states that a priest who came to be known as St. Romanis arrived in the village intent on spreading Christianity. St. Romanis asked the people of Rouen to build him a church and convert to Christianity. The villagers told the priest if he could solve their dragon problem, they would do what he asked. According to legend, St. Romanis met La Gargouille on his way up the hill to the village of Rouen and subdued the beast using only a crucifix. He then led the dragon into the village on a leash made from tearing his robe, and the villagers burned the dragon at the stake. La Gargouille’s head and neck would not burn because they were tempered from his fiery breath, so the head would be placed on top of the newly-built church as a symbol of this priest’s power over La Gargouille. Crist said, "My husband and I traveled to Rouen, and there is a cathedral there with a dragon gargoyle on it."

Another reason for incorporating the gargoyle onto churches was to appeal to a vast Pagan population. Crist said, "The Celtic people were fierce hunters, and they would put the heads of their prey on sticks surrounding their villages to serve as a warning sign and to protect their villages. When Christianity came into being, they were looking for people to inhabit their churches. In one village, it was said that the priest came and cut a deal with the villagers to put one of these heads on the church to make it more acceptable and welcoming to the Pagans. It was an incorporation of their culture."

As time progressed and the Pagan roots of gargoyles began to fade from history, new meaning and reason for them began to evolve. Crist said, "They were also interpreted to be a sign of damned souls who were forever caught in stone on their way to hell. So they were inhabited by spirits."

Gargoyles served to teach a mostly illiterate population about messages the Church was trying to convey about the afterlife. By the Middle Ages, gargoyles were being placed on many of the churches and cathedrals being built. Although the names of many of these sculptures of sacred scarecrows may have been lost to history, a lot of their work is still around today. Apparently many of the artists had quite a sense of humor. Crist said, "Gargoyles were the only place that carvers and sculptors had any artistic license. So the carvers would often put lewd and obscene sort of figures up at the top of these spiritual places — and they didn’t get caught."

Gargoyles as we know them today may have their roots in Europe, but over the centuries they have spread around the world, and each country has added its touch and culture to these creatures. "As they evolved in America, they’ve taken on this whole comic sort of tone. They’ve really lightened up. They’re less evil- and scary-looking and in many ways they reflect our culture," Crist said.

Gargoyles and grotesques are still carved today by a select few craftsmen. Walter S. Arnold is one such sculptor who still makes these fantastic creatures. Some of Arnold’s creations appear on the Washington National Cathedral, which is home to some of the most impressive gargoyles in the United States. Arnold spoke to me from his studio in Chicago on what inspires his creations. He said, "When I was working on the Washington Cathedral for five years, we had an old New Yorker cartoon up in the shop. It was a medieval carving shop, and some patron, a bishop or duke, was in there. The carver was working on a gargoyle, and he had empty flasks of wine lying around the floor. The patron was saying, ‘Where do you get your inspiration?’

"Seriously, it comes from a wide range of things — first of all, from looking at a lot of sculptural forms from all sorts of cultures and times, looking at people and animals. It has always been a form that’s allowed for a lot of creativity and innovation. It’s one of the things I like about them."

So is there something spiritual to gargoyles? Arnold said, "In a way, stone is alive. It’s a pure, natural material; each piece is different and has its own character and variations in it. I’ve spent enough time visiting quarries to have a sense of how beautiful the quarries and the mountains are, and if I’m taking stone out of the mountain, I have kind of a responsibility to create something with it that justifies cutting it out of the mountain."

How about supernatural? "The artist takes it [the artwork] ninety to ninety-five percent of the way, and then every viewer comes to it with their own perspective. In a way, each viewer finishes it differently. So that part of it happens after it leaves my hands, and it will speak differently to each person. I certainly work to make them come alive and look alive, and some of that is technical, some of that is artistic, and some of it is just my feeling on the pieces."

Gargoyles are a compilation of many different animals, both real and mythical, the artists’ inspiration, and our own imaginations. They can be funny, intimidating, and beautiful — sometimes all in one piece. Gargoyles serve as a "living" reminder of our Pagan roots and our very supernatural world.