I recently got re-interested in recording Electronic Voice Phenomena (EVP) and after some initial good results in which I heard clear voices played back through headphones, the results became inconsistent. I had not changed my technique and was recording about the same time everyday I did this. I also settled on one digital recorder that seemed to give me the best quality sound. I had read somewhere that terrestrial and space weather may have an effect on EVP recording. If there is a way of predicting if EVP will be poor before hand or after the fact, I would know that it was not the fault of me or the “talkers” if I recorded poor EVP; but maybe something in the environment.

I preformed twenty eight recording sessions between November 11, 2007 and December 28, 2007 averaging five minutes and thirty seconds in length. They were all done within one hour of 4:00 PM in twelve different locations in rural Halifax County, Virginia. I frequently walk two dogs for about an hour and a half when I get off work, hence the consistent time. There are a number of abandoned farm houses on my walk that I have been haunting for the last few years… so much so that I am now on a first name basis with some of non-physical inhabitants.

For those few readers that do not understand what EVP is, the concept is an inaudible voice or other sound is recorded on the magnetic tape or disc of a recording device, or directly onto the sound program of a computer. Upon playback an audible sound is heard that cannot be accounted for by any physical source at the time of the recording. In my case an example is I am the only living human in a house that is about one mile away from any other living humans. The house has been empty for about forty-five years and has no power near it. I ask questions with a digital recorder running and when I later play the recording back, I hear voices and sometimes answers to my questions.

My method was as follows: I would record in one of the locations using a digital recorder, (I settled on an Olympus that could be plugged into a USB port for easy downloading), and ask questions about objects left in the houses and buildings, what they were used for, who made them, how’s it going, etc. I would then download them to my hard drive and use sound recording/playback software for listening. There are a number of playback and sound analyzing programs out there and folks have their preferences, I am using WavePad because I find it easy to use; I am sure there are better and worse ones, but someone else can debate that. Maybe I am over analytical but it takes me at least thirty minutes to fully listen to five minutes of recording. I would then grade each EVP by the A-B-C criteria established by the American Association-EVP and add to an Excel spread sheet. Basically an A can be heard without headphones and people can generally agree on its content, a B requires headphones to distinguish and not everyone will agree on the message, and a C requires headphones, may require amplification and filtering, and will not be heard by everyone. 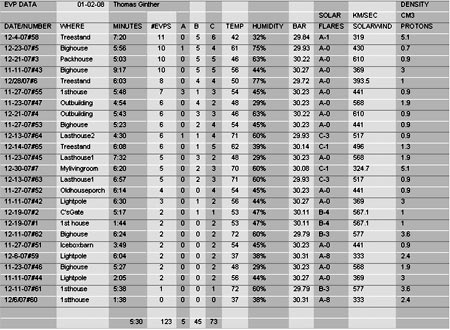 After sorting, it became clear that solar flares do affect EVP quantity and quality. As you can see the first nine ranked had totals of six to eleven EVP, and more B grades with flares at the minimum in the A-0 range. The bottom nine only had zero to two EVP each, and flares from A-0 up to A-8 on through to B-4. Solar flares are rated from A-0 to B, C, M, and X-8; with the X class being capable of satellite damage and electric grid black outs.

Also noted was the top fourteen had an average solar wind proton density of 1.59 as compared to the bottom with an average of 2.25. The density and wind speed vary throughout the day as it buffers the Earth’s magnetic shield, and that may explain some of the EVP in the middle of the data with flares in the C class. Other than that, the temperature, barometric pressure, and humidity were pretty close between the top and bottom half.

As far as where the EVP were taken, I initially thought you had to be in a haunted area as that is what we investigate for CPRI, but I seldom got anything when on a case. So I started out in the old abandoned farm houses back in the woods around my house in rural Virginia, and started out with good results. Then after reading that once you make contact you should be able to record EVP anywhere; I started in my tree stand while I was waiting for a deer to come by and had some good results there as well. I also did one session in my living room and captured five EVP with two in the B class. 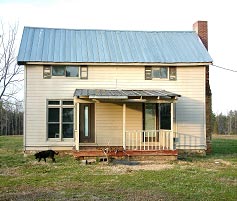 So I am sure readers are wondering what I was recording; so let me start out with Mr. Rogers. About three years ago I was walking and carrying a camera, as I take a lot of pictures and have photographed a number of ghosts. I took a picture of an old empty house and captured Mr. Rogers in his doorway; (see picture and crop of door way) after talking to his grandchildren, I found out he had been dead for about thirty years and the house was empty for about two. From my tree stand I could see the house about four tenths of a mile away, so I though I would attempt to talk to him as well as other people I knew had passed on and see if I could pick up their voices. On December 4, 2007, I asked Mr. Rogers, “Are you about?” and the reply is “#*&@ no.” On December 14, I ask Mr. Rogers, “Can you speak?” and I hear someone saying, “Mr. Rogers, speak,” a pause then, “#*&@ You.” On December 19, I say, “Mr. Rogers you have gotten ornery since you died,” and again I hear “#*&@ you.” Finally, on December 28, I ask about him or if there is anyone else about and I hear, “What’s it to ya?” 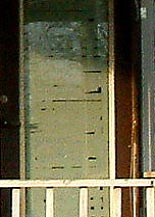 In another house that has been empty since the sixties, I took a picture of a woman and child while I was in the house looking out of the door way (see picture) and I recorded a number of EVP in there as well. There was an old beat up rocking chair and I asked, “Who’s chair is this?” and I hear, “Mommy use that chair.” There was a rock on the floor in the upstairs bedroom and I asked, “Where did it come from?” and the answer was, “What rock?” There is the name “Marie” in chalk on a rafter, and I asked if this is her bedroom and I hear, “Audrey’s,” a pause, then, “Bedroom cold at night.” There is another larger, two-story house that I have visited the most and am greeted by my first name. I have been greeted by, “Hi, Tom” more than once, and, “Bye, Tom, goodbye, Tom” when I leave. Recently, I walked in on a conversation while bringing in some pine and Holly branches to hang above one of the fire places and stated by chance that it was a couple of days before Christmas. This is what I heard in the first minute when I played it back after I got home, “Her father made me an offer, Brian’s fault, I had a girl friend,” three different voices, then, “What day is it? Hey Tom, what day is it?” Once I was upstairs and I asked, “Is there anyone here?” and someone said, “Good evening.” I tell them, “Do you realize you all are dead?” and I hear, “Oh no.” 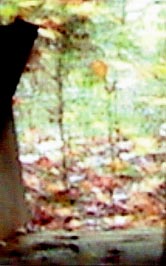 I asked, “Who owns this house?” and heard, “Bradley.” I comment that Bush is president and someone says, “Reagan.” In an old outbuilding behind this house, I found a stick sharpened on both ends and I ask what it was for, and someone says, “Tony made that.” My dog was with me and wanted to come in, and I tell him, “Jack, get out,” and someone says, “Where is the dog?” I asked what was this building used for, and the answer was, “Just an old pen.”

A short distance away in a building called a pack house that was full of junk, there is a pair of shoes and I ask “Whose are these?” and someone said, “They’re mother’s old shoes.” I asked for a name and get, “Sandy Brain.” I asked how many of you are here, and I get, “I really don’t want to speak.” These are just a few of the 123 I collected.

These vary in quality; some are clear, and some need some amplification and filtering, and not everyone will always agree on what is recorded. After you listen to enough EVP, you will develop an ear for it. Most are preceded by a series of clicks and sometimes a static or buzzing sound, the voices are often whispered and sing-song, sometimes reversed, and seldom loud. Most are spoken fast and are best heard when played back at a reduced speed. I am by no means an expert, and this has been a good learning experience that will help me with paranormal research in the future. There are a number of Internet sites that deal with EVP and I have found the American Association EVP most helpful.

For my own purposes this exercise was a success as I now know that a number of factors influence whether an EVP is recorded on an investigation or not. I cannot assume that a lack of any EVP during a haunting investigation is the result of a lack of any paranormal activity and must take solar activity into account.