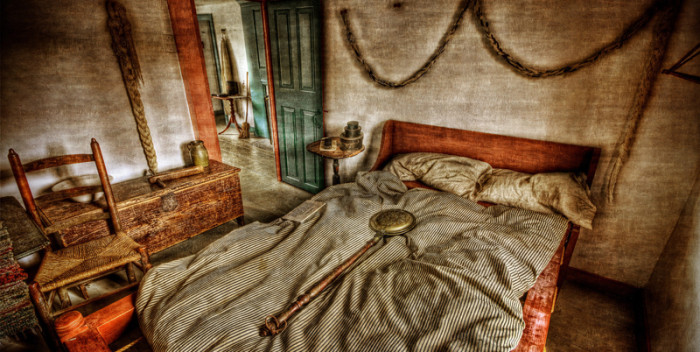 It was about 11 P.M., I had just got into bed and turned on the TV, and after about 5 minutes,
the TV turned off by itself and the telephone rang one time. It then felt like someone put their
arm under my pillow and my head and shoulders were lifted up about 20 inches or so. I then yelled, “Oh God!” and I was instantly dropped.

Another time I woke up in the middle of the night and smelled a strong smell of urine. It was so strong smelling that I thought I had peed myself so I jumped out of bed and checked, but I hadn’t. I then went to the bathroom to pee and I saw a puddle of some liquid on the floor in front of the closet door. There was no reason for liquid to be there. I got paper towels to clean it up, and you could smell that it was strong urine. This worried me, I thought, “Did I do this in my sleep?” It happened again a few nights later with the strong urine smell and urine on the floor at the same spot. Sometimes I would get a whiff of urine throughout the day. I ask a friend that came over to smell me and tell me if I smelled like urine, and I didn’t. I told him what was happening, and a few days later he brought me a book. He said read the back of it and when I did I started crying because it said if you smell urine in your house for no reason that you have a demon in your house.

Some people told me they saw a black shadow in my dinning room and some other weird stuff would go on from time to time. What got me was this was a new house that I had built. I sold it after living there for five years. I was very careful not to talk about moving because I did not want this thing coming with me. At one time I did demand it to leave, and things did settle down somewhat after that, but I always felt like someone was watching me. It creaped me out when I would take a bath.