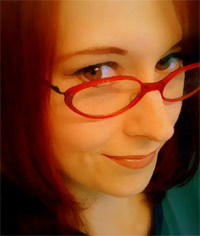 April Slaughter has a cool name. I know she’s probably tired of hearing about it, but I don’t care. I was born with the exceedingly average and bland moniker of “Mike,” so when I hear a unique name I am filled with awe and jealousy. Okay, it’s more the “Slaughter” part that I’m jealous of. April is a very pretty name, but I’m not sure I would have wanted that as a middle school boy. “Hey everybody, that April Brody kid pinch-rolled his jeans again! Let’s pour chocolate milk down his Hypercolor shirt!” But my name’s not April and I’m not a middle school boy. And Slaughter isn’t a middle school boy either, she’s a sweet-heart and a bad-ass paranormal investigator from Dallas, Texas, with 15 years of experience in the field. She’s the author of Ghosthunting Texas, established the Paranormal Source, Inc. as a non-profit research and education corp in Texas, and worked with TAPS Paramag for three years as a staff journalist and customer service manager. She also once told me that she tried to plant dead trees in her front yard all Tim Burton-like until the neighborhood committee put the kibosh on it, which makes her pretty cool in my book.

Slaughter is like the J-Lo of the paranormal world. And I don’t mean that she portrayed Selena, has a lousy musical career, danced on In Living Color and has body parts insured for $1,000,000. I mean she’s the jack-of-all-trades in the paranormal world. You name it and she’s studied it. So what better publishing project for A-Sla than the one she currently has in the works: Utah’s Skinwalker Ranch.

A quick history on the location: The Skinwalker Ranch is a 480 acre property located in Northeastern Utah near Fort Duchesne. According to lore, ages ago two rival Native American tribes of Utah (the Navajo and the Utes) were having a disagreement and the Navajo cursed the land. I say “ages ago” because it’s very hard to know how long ago this happened. Many moons? Since then the property has become what Slaughter describes as a “paranormal playground” of activity. There have been numerous sightings of UFOs, ghosts, poltergeist activity in the ranch home, a giant wolf that eats the livestock and doesn’t die when shot, Bigfoot and cryptids of all kinds, strange cattle mutilations, portals, telepathic communication, missing time, and what is considered in Native American folklore to be the purest form of all evil: The shape-shifting demon, the Skinwalker. Below is an artist’s rendition of the Skinwalker: 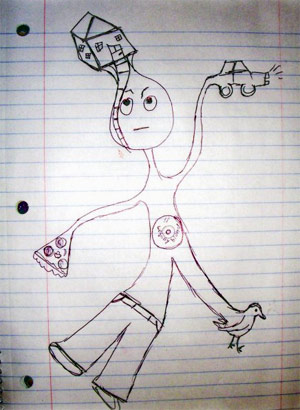 This was drawn by my friend Andy Erikson after I described the monster to her. The logo on the shirt reads “Legally Blonde” for some reason. Hey, a shape-shifter can be whatever it wants, right?

The land was owned privately for a number of years by a rancher who reported many of the claims himself, before selling the land in 1996 to an incredibly wealthy and super-secretive man named Robert Bigelow, which is also a good name. Bigelow has since closed off the location with fences and forbids any journalists or lollygaggers admittance. However, people continue to flock to the borders of the property and sightings have still been reported after overlooking the land. For a look at the Skinwalker Ranch on Google Earth, click here.

A professional journalist would have used this opportunity to ask Slaughter all the pressing questions about the Skinwalker Ranch and the paranormal world. But I’m not a professional journalist. I’m Mike (uggg) Brody and I’m a smart-ass. So please enjoy the short “interview.” For more information on the Skinwalker Ranch and Slaughter’s upcoming works on it, please stay tuned to Paranomal Source and her blog.

Would you still be interested in the paranormal if your name were April Cuddlehugs?

That sounds like I’m pushing fabric softener. Yes, I’d still do this, after a name change.

If you could be any of the creatures that lurk at Skinwalker Ranch, which one would you be and why?

I’d be the giant wolf that can’t get shot. Free beef!

How were they able to make prostitution legal at the Skinwalker Ranch?

I think you’re thinking of the Bunny Ranch in Nevada. Skinwalker would be a good name for that though. Sounds like Skinamax.

Why won’t George Lucas let people on the property?

(Unfortunately, Slaughter wasn’t able to hear this HILARIOUS reference to the Skywalker Ranch because she suddenly belted out “Honey! You dropped the book on the dog!” which is something you’ve never heard at a trailer park. Not that she lives in a trailer. Not that there’s anything wrong with living in a trailer. Moving on!)

Is it true that Paul Newman’s estate is considering buying the location and making it “Newman’s Own Skinwalker Ranch”?

Is that a salad dressing joke? He should! Hidden Valley is boring. There’s no cows being torn apart.

Has anybody considered asking the Native Americans to do “take backs” on the curse? Wouldn’t that be a nice thing to do at this point?

The two tribes don’t talk much. Plus, they don’t like saying the name “Skinwalker.” It’s like Voldemort. Maybe that’s where the idea came from?

Am I going to have weird men in black following me around after this article?

Yes, because I will tell them to.

(Please check back in next month to “Confessions of a Novice Ghost Hunter”, when Mike returns to the investigation format and writes about his experiences spending the night at Alcatraz.)