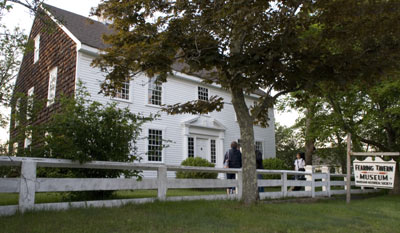 I have to give credit where credit is due. The “Fearing Tavern” is a pretty damn good name for a haunted house. Strangely enough, it’s not even this building’s first chance to have a creepy name. Located in Wareham, Massachusetts, it was built in 1690 by Isaac Bump, before it was purchased and expanded in 1765 by Israel Fearing. That’s right: It was built by the BUMPS before the family of FEARING found it. Can you hear the chains rattling? If only I could have been there in 1765 for Mr. Fearing’s bidding war against Hezekiah Shivers, Shotgun Scarepants, and Ghosty McFrightful III.

But nonetheless, the centuries-long history and names are real (at least the first two) as well as the Fearing’s reputation for paranormal activity. Today the tavern sits uninhabited except it’s a museum during the summer weekends for three hours a day. But during the American Revolutionary War, it was used to house and hide British soldiers. Over the years people claim to have witnessed the ghosts of British soldiers sauntering to and fro (They’re British, I imagine that they saunter a bit), as well as women in period dress, and the sounds of horses and wagons approaching. Rumor has it that it was also a part of the Underground Railroad that helped slaves escape into Canada, which doesn’t necessarily account for any paranormal activity, but certainly makes up for that whole “hiding the British” thing.

Recently I was invited to come out to the Fearing Tavern and investigate with some friends that included Matt Moniz and Tim Weisberg of Spooky Southcoast Radio, Andy Lake from Greenville Paranormal Research, and Jeff Belanger from some Web site called Ghostvillage or something. Even though I live close to 1,500 miles away in Minnesota, an opportunity doesn’t come along like this everyday. Throw in the fact that the Fearing has only been investigated on a handful of occasions by the above mentioned groups, and only with the official consent and sanctioning of the Wareham Historical Society, and I was sold. And they had gotten activity! On previous investigations, several people heard voices where none should be coming from, dozens of EVPs were recorded (with three or four that Matt Moniz describes as “Grade A”) and a strange light was captured on film in the doll room. (Click here to see footage of said light.) I wouldn’t miss this for anything!

I flew in from Minneapolis to Portland, Maine, and decided that I had time for a couple quick tours on the way down to Wareham. My first quickie was Salem, Massachusetts, the site of the Salem Witch Trials. Salem went from a place that hated witches so much that they hung and pressed them, to being a town absolutely swarming with witches. I believe that’s called karma? If Salem isn’t the flag-waver for the “If-you-can’t-beat-’em-join-’em” creed then I don’t know who is. 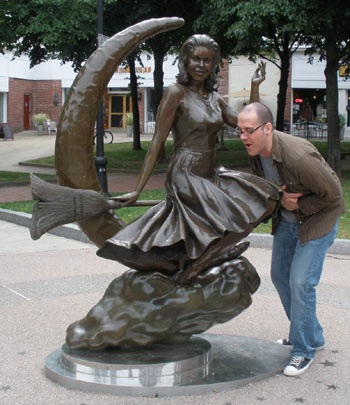 The next stop was the Lizzie Borden House in Fall River, Massachusetts, where someone (probably Lizzie Borden) savagely and famously murdered two people with an axe. The original plan was to fully investigate here, but unfortunately it didn’t work out that way. But I got some really cool pictures like this soap container, which proves that ax murders can become kitschy if enough time has expired. NOTE: Not authentic 1890s soap. 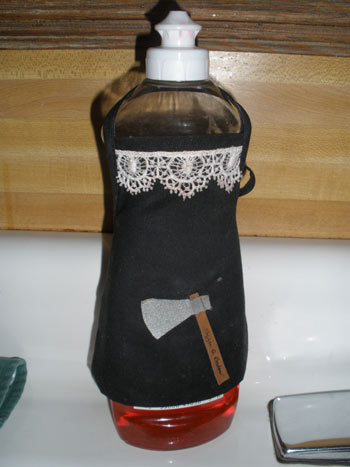 I met up with everybody else at Matt Moniz’s house about five miles down the road from the Fearing Tavern. In Matt’s driveway, I was greeted by a pink tassled children’s bicycle next to a pile of wood with a machete wedged into it and no kids to be found. I’m not suggesting Matt is guilty of some kind of crime, but I’m not NOT suggesting it. Needless to say, the mood had been set. 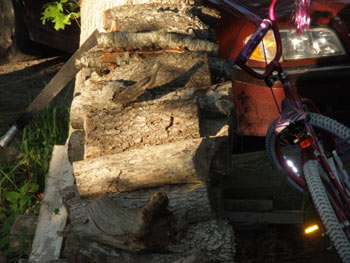 Our group arrived at the fantastically beautiful tavern just as the sun was going down. Let me tell you something: There’s old and then there’s old. In Minnesota when you say a building is old, that means Cheap Trick played there. But this place was built in the 1690s in New England. That just boggles my mind. I don’t even know what humans looked like back then. I imagine a bunch of Boston-accented cavemen with clubs complaining and asking, “Who pawked the dinosaw in the yawd?!” (Incidentally, I should never, ever become a history teacher.)

Our guides from the Historical Society were nice enough to allow us three hours time, so we all quickly gathered our flashlights, digital audio recorders, “Shack Hacks” and Oviluses (what is the plural of that? Ovili?) while Andy Lake set up his camera to try and record the ball of light in the doll room once again. 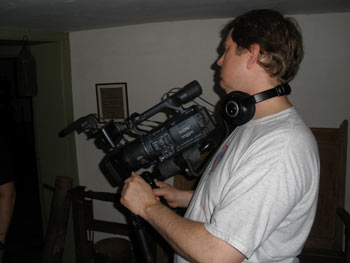 Perhaps I should explain what those last two devices are to those who don’t know. In layman’s terms, a “Shack Hack” box (pictured below) is a radio-device (possibly purchased from Radio Shack) that is altered or “hacked” so that it scans through each radio station second-by second. Its preferred use is with the AM frequency. It is believed by some, and disputed by just as many, that ghosts can manipulate these devices to make certain words pop up, thus answering the questions that you ask. 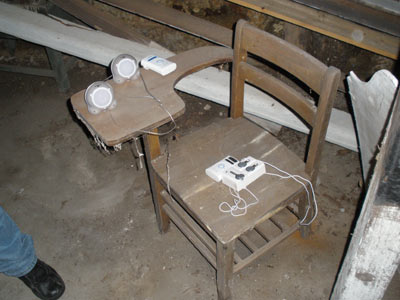 We began using this machine and started getting words repeated quite frequently. Names that came up several times were “Murph” and “Tom.” It answered “yes” and “no” to multiple questions. Also, the box repeatedly said “Jeff” and on more than one occasion it even seemed to say “Belanger.” Here’s the problem: It also said “Kobe Bryant,” and “We want the funk.” I have a hard time believing that the ghost of funk legend Bootsy Collins was with us at the Fearing Tavern. Especially since he’s still alive. (Perhaps you are wondering why I mentioned Parliament Funkadelic’s bass player Bootsy Collins instead of front man George Clinton? The answer is because I never shy away from an opportunity to use the word “Bootsy.” It’s a great word. Try it sometime when you’re having a bad day. Just say “Bootsy” out loud in public. Yes, people will think you’re nuts. But let’s face it, ghost hunters, people already do.) I know that there are some people who will argue with me on the validity of the Shack Hack, but until I see something amazing come from it, I just won’t be convinced. In the meantime, it will just be something that is interesting to me. Some people have told me that they’ve had a voice come through over the radio frequencies, however, I have never experienced that so I can’t say for sure. BOOTSY! 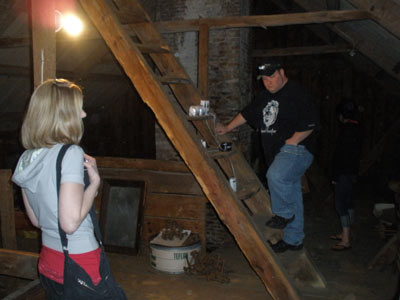 Which brings us to the Ovilus. This also requires some laymen terminology. The Ovilus is a small, usually hand-held machine that responds to electro-magnetic fields. It has a 512 word electronic dictionary in it, with each word corresponding to a certain magnetic field. The theory is that ghosts are made up of energy, or effect the energy that is around them and can therefore manipulate this machine into “talking” with a robotic voice. Oh, and it sounds like just Steven Hawking. Like a jerk Steven Hawking that either ignores you or says a bunch of stuff that has nothing to do with what you were talking about. If the Ovilus went to high school it wouldn’t have a chance of getting on the homecoming court.

I decided to take the Ovilus into a quiet room with my friends Liz and Sarah. Here’s an example of a bit of our “conversation” with the Ovilus at the Fearing Tavern:

“Is there anybody here who would like to talk with us?”

So then of course somebody automatically says, “Oh, he’s a DOCTOR!” Well, maybe he’s a chicken too? Maybe Zander the chicken doctor had too many apples, fell off his car, everybody laughed, and now he’s out for murdery revenge. How can we know? And what the hell is “murdery?!” I’ve heard it say this word about 20 times and I’m pretty sure that’s not in the dictionary. It makes it sound innocent almost.

“Gotta be honest, I’m a little murdery today. I should have some coffee.”

The really maddening thing about the Ovilus is that sometimes it seems like it’s saying something authentic. For instance, every once in a while it’ll go on a tangent where words seem to really fit together. This happened to me at the Spalding Inn in New Hampshire. I heard it say (within a span of 30 seconds) “sister – brother – uncle – mother – hurt – sorry – demon – demon.” Another time, one had been laying dormant on the couch for ten minutes without saying a word. I asked its owner if I could take it for a walk down to the end of the hall to see what happened. I hadn’t even taken two steps with it when it said, “Walk – Mike.” To which I replied, “Did that just &%#ing say ‘Mike’?” Then it immediately said “Mike” again.

But that didn’t happen this night. Mostly it just spit out random words that we tried desperately to attach meaning to. And then I experienced an obstacle that I wasn’t sure how to deal with as a newcomer to ghost investigating: Background chatter. While we were using the Ovilus about four people came into the room and started talking away quite loudly. Let’s see if you can guess what I did next:

A) Asked politely if the others could be quiet so we could further investigate in peace.

B) In true Bostonian fashion, smashed a chair against the wall and yelled out something unprintable about their mothers.

C) Acted like a typical passive-aggressive Midwesterner and mumbled softly to myself about how rude it was while I dejectedly stared at my shoes and felt murdery.

Unfortunately, I hadn’t discovered my “Bootsy” theory yet, so the answer is C. I didn’t do anything. But every time I go investigating I learn something new. And this time I learned that when you’re sitting in the corner of a dark room, people don’t always know you’re there. So speak up, because they might say something bad about you or two unattractive people might try and get busy in front of you. I’ve heard stories!

The other thing I learned on this trip (double bonus!) is that sometimes you fly 1,500 miles to a supposedly active location and nothing happens. Nobody heard any voices, or captured anything on video, or had any experiences other than a few odd radio voices in spite of all the evidence from previous investigations. And honestly, getting nothing is the norm. Ghost investigating is a lot like my experiences with girls. I’ve seen some before. One talked to me once. It doesn’t happen often. But I know if I keep on trying, eventually I’ll meet a ghost with low enough standards to allow me to tape them.