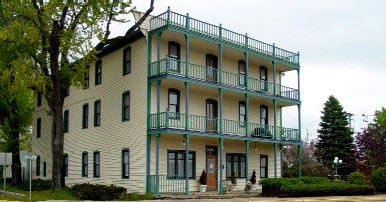 Thayer’s Historic Bed and Breakfast in Annandale, Minnesota, is what your fancy grandma’s house would have looked like if she were into goth. Sure, there’s doilies, little dolls sitting in every corner, and kitty-cats running around. But on top of the doilies there’s a book by Edgar Cayce, the dolls have the piercing glare of Chucky, and half of the kitty-cats are dead. (I should clarify right off the bat that they are ghost-kittens. Not dead cats… I don’t care what kind of themed hotel you’re running, I’m pretty sure that’s not legal.) 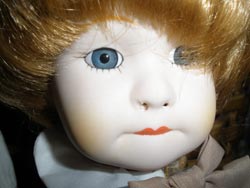 That’s right, Thayer’s is haunted. And for a fee you can spend the night in any of their variously haunted rooms. There’s Room 203, “The Purple Mist Room,” where your keys move around. There’s 207, “Gus’s Room,” where pennies are left overnight by one of the resident ghosts named “Larry.” (Just kidding, it’s Gus.) Room 306 – “Ghost Kitties!” It’s horrifying! They nibble on your toes all night long! Yarn everywhere! And then there’s my personal favorite: Room 204, “The ‘Romance’ Room,” equipped with a sexy whirlpool for honeymooners and/or Marvin Gaye fans of differing kinds. According to the Webpage, newly married folks staying in this room will be visited by ghosts if they “invite them in,” which brings a whole new meaning to the term threesome. (Make sure you’re not the one left out doing EVP’s!)

Being a novice ghost investigator, I found Thayer’s to be the ideal spot for my first solo “hunt.” It’s scary enough to satisfy the spooky meter, but warm enough that I can go running to the milk and cookies if need be. The place is old (built in 1895), but also less than an hour from my home quarters in Minneapolis/St. Paul, and 50 feet from a Holiday Gas Station. I could do this. Rome wasn’t built in a day, but maybe it would have if someone had given them a Red Bull or two… Just saying.

I decided to spend my night at Thayer’s on a Wednesday night so it would be slow. I preferred the solitude. It was going to be just me and a woman the Thayers’s Web site described as “owner/proprietor and internationally trusted psychic, Sharon Gammell.” Call me crazy, but I didn’t feel like walking around with a tape-recorder outside of some newlyweds’ door. That might be hard to explain. (“This is the Romance Room, right? Aren’t you gonna invite me in? No, technically I’m not a ghost yet, but… hello? Invite me in!”) Anyway, the previous night I left an update on Twitter (shameless plug: http://twitter.com/mikebrodycomic) about staying at this particular bed & breakfast. A psychic medium who I had never met in real life left me this message on the site (grammar and mild Prince-like writing has not been changed):

“Wow! What a place U R staying at! I pulled up the pictures of that room (Room 304 – “Joan’s Retreat”) and I DEF feel that someone likes 2 sit in that left chair. How awesome! Yes, this is an older women with her hair tied 2gether in a bun and the collar on her dress looks like a lace doily. She also has a pointy nose… not like a witch…LOL…but thin and pointy. Hope she visits U!!”

No Raspberry Beret? When I got to Thayer’s (and listened to Purple Rain five times) I told the owner about this woman’s predictions. She said she was dead-on. We were off to a good start! 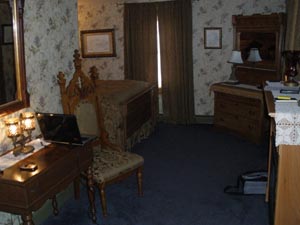 As I walked into my room (as mentioned before, it’s “Joan’s Retreat” after the Joan of Arc photo above the mantelpiece) and threw my stuff on the bed, I noticed the lights to the right of me were flickering on and off. Later on, the owner told me that this is the spirits’ way of saying “hello.” That, or I was standing on the power cord. Or even worse, I was standing on the power cord, leaving frustrated ghosts with no way to say hi. What else could they do? Shaking a bed or winging a gargoyle lamp across the room doesn’t really reek of “welcome,” does it? I have thought long and hard about this, and I have decided that when I am dead and a ghost, my official calling-card and ghost-welcoming sign will be a particularly nasty wet-willy. It might not be pleasant, but dammit, it’s not vague like possible electric failure. When you get a slobbery spirit finger in your ear, you know Ghost Mike Brody’s here!

The first thing I decided to do was a shaky, unconfident EVP session. The only advice I’d gotten on these things was to do them in 2-5 minute sessions and to leave it on by your bed all night. Fair enough. Here’s the thing, though… I don’t care how serious you are about ghost investigating, the first time you ask questions out loud into a tape recorder to ghosts that may or may not be a figment of your imagination, you feel like a freakin’ boob! You mostly whisper and mumble and talk really fast. Like an auctioneer with stage fright who got punched in the solar plexus. I can’t even imagine how awkward that might have sounded to an uninformed passerby as I stammered out random things like, “Please say hello,” and “Who’s there? What’s your name?” (What an icebreaker!) Like I was just some lonely dude that rents old hotel rooms in the hopes that a strange wayfarer will stumble into my room and become my BFF.

Here’s the irony though: I got an EVP! It’s muffled and hard to understand, but it honest-to-goodness sounds like a male’s voice saying something like, “Meh.” I figured there were one of two explanations: 1) It was a dude walking on the sidewalk outside. 2) It was a ghost giving his general review of my ghost hunting skills: “Meh.”

Shortly after that, as nighttime came on, I found that the number-one problem with having ghost kitties in the building was also having real kitties. I would hear a disembodied “MEOW,” then fill my own personal kitty litter myself, if you know what I mean, and then realize that the paw reaching under the door was a real darn cat. I actually became quite good friends with one of the cats, Mr. Tennessee. Below is a picture of our first meeting early in the night, while the second one is an honest-to-goodness picture of him licking my head at 5:00 AM. When expert investigators told me to leave a camera on my nightstand, I don’t know if this is what they meant. 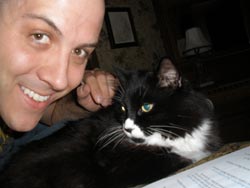 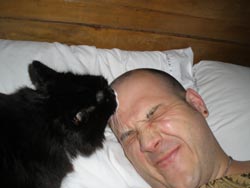 Here’s when the fun stuff started to happen. Being the general dummy that I am, I forgot to bring any kind of equipment besides the recorder and a camera. And by that I mean I don’t own any. This is what happens when a freeloader goes independent without really thinking it through. So I decided to read a book and hope that the action would just miraculously come to me. You guessed it: I fell asleep. What a sleuth. But then… I was awoken by a woman’s voice! It was clear as a bell, yet still indistinguishable as far as words went. It was high-pitched and it was not the owner. I distinctly remember that it was 3:17 AM. Nobody was outside. You know how sometimes you hear something in the middle of the night and you chalk it up to hallucinations or creeks or whatnot? This was not that. All the hair I had (not much) stood up on end. I shot wide awake. Then my computer turned on by itself. It was on hibernate, which is not like screen-saver. You have to physically hold the power button down to get it to turn back on. It was around the corner from me, but I could hear the computer gears turning as it came back to life. And then, like a true professional, I fell back asleep. What did the recorder say when I got up in the morning and checked the audio for exactly 3:17 am? That’s right, nothing. I decided not to record that night, because I didn’t feel like listening to eight hours of me sleeping. I am officially the worst ghost investigator ever.

I woke up the next morning feeling the most regretful I have since college. My stay was coming to a close and I felt like I’d completely dropped the ball. Luckily, here’s where my only bit of expertise comes in: If you are going to stay at a haunted place, stay at a bed & breakfast! The way to a man’s heart (and the best way to forget about a completely botched ghost investigation) is through the stomach. Because jeez-louise, Thayers’s owner Sharon Gammell’s cooking is to die for! No pun intended. No, really, no pun intended! What other term do you use for a good cook? Don’t judge me! Seriously, I wish I was a food critic, because then I could give it a glowing review in flowery linguistic style that Walt Whitman, William Shakespeare, and Ernest Hemmingway would envy. Unfortunately I am not, so this is what I’ve got: It was eggs that tasted like tacos. But I kid you not, it was the best freaking eggs that tasted like tacos I have ever had in my entire life. You could have put caviar, quiche, peach gummi rings, you name it, in front of me, and I’d still pick those eggs that tasted like tacos! There were other courses too, like fruit and pie. (Why can’t I describe food?!)

So do I think that Thayer’s Historic Bed & Breakfast is haunted? I honestly couldn’t tell you, because that would imply that I did things that would result in a yes or no answer. However, I did learn a lot of valuable lessons on my excursion.:

See you next month when I investigate (for real, this time) the infamous Lizzie Borden House.