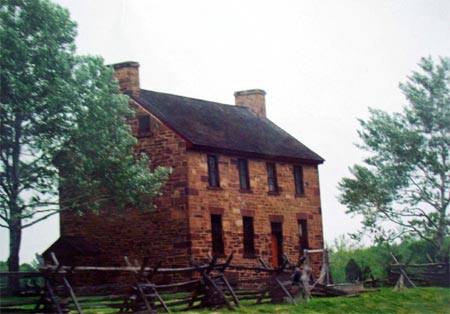 This all started in May of 2009. My dad brought me to Washington DC, for the police memorial. I was studying the Civil War in history class and so before we left, we went to Manassas Battlefield (site of the famous battles of Bull Run). Anyone who has been there knows that there is a well-known field house there called the Stone House. Anyway, people aren't allowed into the field house, but you can look in the windows. So that is exactly what I did. When I looked into the window, I saw a man in all gray, pacing. I quickly stepped away from the window and walked back to my dad's car. Nothing seemed out of the ordinary for a while after that.

When I went to a summer camp in late June, I kept having weird dreams about the field house. On the last night I had a dream that I was back at the field house… but this time I was in the field house. I figured that it was directly after the first or second battle of Bull Run. There were Confederate soldiers with blood on them, some were missing limbs. No one paid attention to me, except for one soldier. He had brown eyes and light brown shaggy hair, he also had bloody a scar going across his face. He looked at me and said, "This is only the beginning." I assumed he was from Tennessee from his accent, he grabbed my shoulders and ran through me. I woke up in a cold sweat back at the summer camp. I sat up and read the clock, it said 3 am and everyone was asleep. I laid back down and let out a sigh, It was only a dream I thought. I looked around one more time to see if I had woken anyone up, and the same Confederate soldier that talked to me in my dream was standing next to my bed, looking at me! Before I could scream he put his hand over my mouth. I could smell the gun powder, and he shushed me and told me, "I won't hurt you." I blacked out after that. I didn't eat much that morning… everything smelled like gunpowder.

Not that long after I came home from the summer camp I had another dream. The Confederate soldier kept saying he wouldn't hurt me. He also confirmed that he was from Tennessee. In late July, my parents, two sisters, and I drove down to Florida. We were at a gas station in Tennessee early in the morning, I was walking around the perimeter of the gas station while everyone else was inside going to the bathroom. I was behind the gas station when I felt a rough hand grab my shoulder. I balled up my fist and spun around, trying to punch whoever grabbed my shoulder, but my hand went through air. The same Confederate soldier was smiling and laughing at my reaction. "What do you want?" I hissed at him. He laughed some more, and I couldn't help but smile for a second. He stopped laughing and said, "I want to welcome you to my home… and give you this." He handed me my phone charger, which, I realized, I had left still plugged into my wall, "Thank you." I said, and he laughed some more. My mom started calling my name, and he disappeared. Throughout my entire week in Florida, the soldier would show up and tell me stuff about the Civil War. When my dad, my friend (she and her family had joined us on the trip), and I went into the war museum, we stopped by the Civil War section. I felt a rough hand on my back and I could see a faint outline of the soldier pointing at some pictures and other artifacts from the Confederate army. He was talking, but I couldn't hear him. Finally he pointed to a Confederate uniform and I could lip-read what he said, "That was mine." I almost fainted. After I finally got my SD card back from the Walgreen's where I got my pictures from Washington DC, developed, I went through the pictures on my computer and came across a picture of the Stone House. It looked like a normal picture, except if you look by the fence in the bottom-right, there is a picture of a man crouching and maybe holding a riffle.