Being a paranormal investigator who writes books about paranormal investigation is awesome in a "that and a couple bucks will buy you a Starbucks ANYWHERE" kind of way. I mean, at this point, having written three books has me rollin' in the deep, for sure, but it wasn't always this amazing. I'm not going to boast, but I like being able to buy a new lip gloss every six months when that royalty check shows up. Who wouldn't? It didn't start out this way, though. 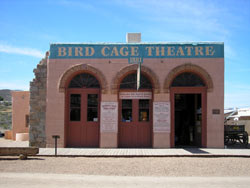 Starting at the bottom has you rubbing shoulders with the bottom feeders, and that's not a place you want to spend a whole lot of your time. Sadly, there are more bottom feeders in this field than I care to consider, and the ballast that is created with their cavalier disregard for legitimacy and integrity is something that affects everyone with a passion for the paranormal.

Why am I rambling on so? I was just watching an episode of one of those "come on TV and tell us your ghost story" shows which featured a particular location in Tombstone, Arizona by the name of the Birdcage Theatre – the very mention of which made my body seize up as though I had just consumed barium contrast enhanced with Visine. I grabbed a bucket and sat myself down to see how big of a helping of unmitigated exaggeration and half-truth would be served up as the day's special.

I was not surprised with what I heard.

Before I begin, I want everyone to know that when we began writing our first book Scare-Izona: A Travel Guide to Arizona's Spookiest Spots , the Birdcage Theatre was at the top of the list as far as places we wanted to investigate. The age of the place alone lends itself to the possibility of place memory at the very least, and surely since we were "neighbors," we would be welcomed with open arms and an Apple Brown Betty, right? Yeah. Did I mention the part about being at the bottom? We'll come back to that topic shortly.

I see on the screen a big guy with a big hat not unlike Boss Hogg who started talking about how he had grown up in the Birdcage Theatre and his family owned it and it was haunted by lots and lots of ghosts. His story was further corroborated by another gentleman whose name is not one that I have ever heard. If he's local and interested in ghosts, I would most likely have heard his name. Neither search engine nor social networking site brought up any information on him. That's not necessarily a nail in the credibility coffin, but it certainly gave me pause.

Between the two of them, they wove a tapestry of spine-tingling horror and chilling tales of ghastly, ghostly goings-on that would have anyone with an interest in the paranormal and the Wild West positively salivating over the idea of investigating the property. I can completely understand because that is exactly how I felt when I was making my wish list for my book. Sadly, that isn't exactly how it all panned out. I placed a call to the BT to speak with the owner about getting access for a few hours for our book that we were writing and I explained that I thought it would be a perfect location to feature in our book about haunted places in Arizona. Eventually, I got a call back from Mr. Big-Guy-with-Big- Hat who started his response with this statement: "Okay, this is how we do groups like yours…"

Indignant at the instantaneous dismissal of my request, I listened with slack-jawed disbelief as he stated that – and I am paraphrasing – since they had been featured on wellknown shows on wellknown networks, they really didn't need our publicity, and since there wasn't anything in it for them, they would let us investigate if we paid them several hundred dollars.

Considering the history of the place rests on laurels of ill-repute, I shouldn't have been surprised by the feeling that he had just leaned into the passenger window of my car and told me how many ways he could do my group, for a price. Unfortunately, I was not about to be his Huckleberry.

We ended up with a fantastic book without including this location, but in the process of information gathering, we heard a few rumors that are at least as interesting as the ghost stories. For example, I heard from not one but two separate sources with differing degrees of separation from the Birdcage Theatre who had been invited to come down and "play ghost" for an investigation by tapping on exterior walls and throwing rocks to suggest the presence of otherworldly entities. Further, a friend who lives in the area and knows much about local architecture explained that the bullet holes that are a favorite bragging right of the Theatre are rumored to have more likely been the result of Black and Decker, rather than Smith and Wesson.

Honestly, they aren't the only rumored offenders of phantom phantasmagoria, either. One bonus of doing what we do is that people open up like Ali Baba's cave when they hear the word "paranormal." During an investigation of a particularly unsavory location in Bisbee, we had the pleasant honor of meeting a lady who worked at the Copper Queen when a very famous ghost show breezed into town. She began to whisper in hushed tones as though someone might hear he…someone who might want to bust her kneecaps. She told us that the production crew came in a day or two early and began rigging the place for optimum results. I am going to assume that everyone already knows how I feel about ghost shows, but it's a bit more frustrating when proprietors jump on the bandwagon of chicanery. To me it says that they think nobody actually researches this stuff seriously, and that it's all made up, anyway, so what's the harm in pulling the wool over the eyes of potential customers?

That leads me to the inevitable conclusion that most places that you've ever heard of are just tourist traps looking for a new way to make easy money. Kind of like the buildup of going through "The Thing," only to find out it's a fossilized turd wrapped in some broadcloth in the back of the DQ garage. Even the aforementioned unsavory location (a small inn, no less) asked us, after a long, uncomfortable, and literally dangerous night of investigating, "What do we get out of this?"

Now, mind you we paid for our rooms and received no discounts or special courtesies. I quoted him back the room rate as a reminder of what he "got out of it," and we made our way back to the safety of our homes and the disinfecting powers of a hot Silkwood-esque shower.

What is a Ghost Hunting Writer to Do?

I guess the point that I am really trying to make is that there is a real deficit of honesty inside the crazy world of paranormal investigation. While television has certainly helped with accessibility to some locations, it has also left the owners of some locations with dollar signs in their eyes and a taste for notoriety. It is more than a little disheartening. The possibility still exists that these locations have legitimate paranormal activity, but paying to visit these locations is starting to feel like I'm paying to see a bearded lady or some guy with skin like tree bark. So, I've decided that this is how I am going to do locations like that. I'm going to write about them. When I write about them, I am going to tell people to stay far, far away from locations that are only looking to find the ghostly images of the dead presidents that magically appear on the paper in the investigator's wallet. I'm going to include thinly-veiled comments in all of my books in the "how not to investigate" sections, and I might just start randomly posting it on bathroom walls – possibly starting at the locations themselves. (Note: include Sharpie in investigation kit)

It's time to start taking back ownership of the paranormal field and keeping it safe in the hands of people with a sincere interest. It doesn't matter if you are a hardcore scientist or a lover of anecdotal ghost stories, as long as you have reverence for the subject matter. We loved ghosts before it was cool to do so, and we know that the best ghosts in the best places don't have price tags or cover charges.

New England Legends Podcast 213 – The Devil and the Crying Rocks