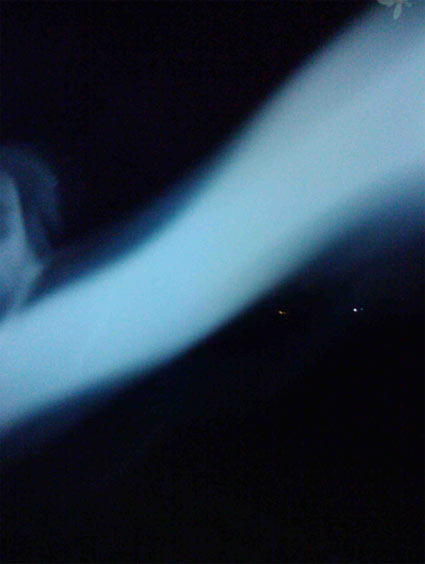 On July 30, 2010, my husband, daughter, and I took the Haunted Las Vegas tour. Some people have described the tour as a dead tour rather than a haunted tour because most of the tour deals with deaths — celebrities, jumpers (Luxor, Stratosphere) — that have occurred in Las Vegas. The majority of the tour is a bus tour, visiting the sites of deaths. However, there are two stops on the tour to get out and experience potential hauntings. The first is at the Flamingo. No one experienced anything at this stop. The second stop is at a city park in Henderson. There are supposed to be at least two separate hauntings at this location. The first is around a park bench where two boys were murdered and their bodies were dumped. Nothing happened here this night. The other site is a memorial to a young man who died crossing an Interstate Highway on foot.

The family of the man has placed a small memorial to him and planted a tree in his name. The guide indicated that pictures taken in the area frequently generate orbs and occasionally mists. My daughter and I took pictures of the picnic table and then wandered over to the area of the tree. There were only seven people on the tour, so it was easy to quickly see where everyone was.

It was eleven at night, so there were no other visitors to the park. I waited until everyone had left the area before taking any pictures. I was standing about fifteen feet away from the memorial tree and took several pictures, with and without flash on my cell phone. I took one picture and immediately saw a blue-white streak. There was no one standing between the tree and me. I took the picture over to the guide, who made the comment that this is ectoplasm and I must attract spirits. No one else took anything of any interest that night. I thought my picture was rather entertaining, nothing more. It was only later that I looked at the picture more closely and noticed something else. At first glance, in the small cell phone screen, the image at the left side of the screen just looked like more blue stuff.

However, as soon as I downloaded the picture to my PC, it was very obvious that the image on the left is a face. The hair is clearly defined and there are layers to the hair. There is an eyebrow visible and a darkened area around the eye. People looking at the picture have one of two immediate reactions — the first is just simply a face, at the edge of the jaw line, a collar of a shirt is visible. However, others look at it and see instead a large mouth with a darkened mouth line extending almost to the ear — similar to the makeup of the Joker in the Batman movies. Unfortunately, this is what I see and to me the image is malevolent. I originally thought that the large blue-white streak was part of the face – the image reaching for me.

After looking further though, it appears that the image is instead an arm between the face and myself (the shoulder is at top right, elbow mid screen, hand is outside the frame). As if someone has stepped in between us and stopped the face from advancing to me. Note that there are leaves from a tree in the upper right hand corner. They are in focus and not blurred (the camera was not moving). The large blue-white streak (arm) is between me and the tree.