Paul Bowles (1910 – 1999) is considered by critics to be one of the greatest American short story writers. He was also a fine novelist, composer, and poet. I was fortunate to know him, first as as teacher during 1968 at the California State University at Northridge campus, and later as a friend and the godfather of my two daughters, Mandy and Dawn. We corresponded frequently until his death in November 1999. I fondly remember being in his two college courses, one about existentialism and the novel, and the other about advanced narrative writing. Bowles was an insightful and creative teacher. I wrote about Paul Bowles in my memoir: Isherwood, Bowles, Vedanta, Wicca, and Me (2001).

During December of 1968, I visited him three times at his hotel room near Santa Monica, California. On the second visit, we discussed Witchcraft and the supernatural. Bowles was keenly aware of Witchcraft and magickal practices over the course of his world travels. He was also aware of ghosts.

We were going over the final draft of my short-short story which would appear in the first issue of the literary journal he would help found named Antaeus (1970). I handed the short manuscript back to him. He glanced over it, smiled, inhaled on his cigarette, and said: “This is a fine story. One of the finest. It has a certain emotion to it that makes the reader think. Do you have another one to send later?”

“I am working on some new stories."

“Send them all to me. I want to see them. And come visit me whenever you can.”

He placed my short-short story with his other personal papers and leaned across the chair towards me. “You enjoy writing fantasy stories, don’t you?” 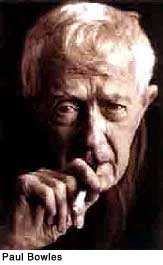 “I recall Christopher Isherwood mentioned to me about some of your early fantasy tales.”

We both laughed over that. Bowles had known writer Christopher Isherwood for many years. I had known Isherwood since I started corresponding with him as a young teenager. Living in Santa Monica Canyon, I could look out my kitchen window and see Isherwood’s home on the cliff overlooking the sea.

“I feel comfortable writing it.”

Bowles nodded. After a few moments, he said: “This hotel has ghosts. Do you sense their presence?”

“This is an old hotel. It must have many stories to tell. I have seen things, Witchcraft things, that are true and took place. I believe in the possibilities of what the supernatural holds, what is just out of eyesight. I have seen things.”

As Bowles spoke, I made a mental note of what he shared with me and would later write it down in my journal. We visited for over an hour.

Time passes. I grow older. I am not the young, adventurous man of the year 1968. But today in 2007, as I write this at age 62, I recall Paul Bowles, Witchcraft, and the supernatural. Bowles was a perceptive man, and he understand the value of personal inquiry. I have taken that to heart over the years, and I continue to write down what I encounter, and see.

The world of ghosts and the supernatural is around us in one form or another, forever. Be prepared for anything while you live, for it makes the questions more acutely beautiful when they are answered with truthful answers. That is truly how it is.