When individuals come to me with their experiences, I must first consider bias and perspective. I assume they know my background (why I’m usually contacted in the first place), but in cases otherwise, I like to remind them that I am a “skeptical believer.” I am going to question all the evidence provided, as I would expect any of my colleagues or peers to do; it is a big part of the scientific method. However, sometimes even the scientific realm, by “accepted” definition, has experts researching phenomenon that has yet to be proven. The Einstein, Curie, and Sagan of this era are, perhaps, presently exploring the “strange and unusual” and I pray they are not being deterred to do so because it doesn’t fit the required measurements of modern science. So, as we continue to question and explore the unknown, the metaphorical gingerbread crumbs of evidence become strange trickles of unknown ectoplasm.

Some claims may seem absurd (e.g. levitating farm animals, contorting toddlers), however, some claims are more “normal” in nature. One such common phenomenon that consistently comes up within parapsychology, psychology, the paranormal, and neuropsychology, is that of visual hallucinations. Images that are observed and interpreted, but not by others, are hallucinations. What else could they be?

Hallucinations, defined as the perception of an object or event in the absence of an external stimulus, are experienced by patients with conditions that span several fields (e.g., psychiatry, neurology, and ophthalmology). Hallucinations often trigger requests for psychiatric consultation. In other words, if you’re seeing little green men and no one else in the room is, you might be hallucinating. Whether stemming from a medication or drug causing short-term psychosis, an ingested psychedelic mushroom, or any other reason, hallucinations can be terrifying in nature, even haunting.

They linger, it’s hard to move past them. They can lead to behaviors that can interfere with daily life, even resulting in a diagnosed mental illness. Accidents, developmental disorders, or adverse side-effects of medications can result in the presence of something that you know isn’t there and it can begin to distort your reality. Some learn to live with it and some even enjoy it. As a psychology student with severely mentally ill clients, schizophrenia is a common diagnosis in my demographic. It is a mental illness that involves hallucination.

Eyes shift, emotions change. Children shudder from something unseen. But how do we diagnose something external, or paranormal, rather than something more internal and physiological in nature? Ideal assessment involves scientific tools and, if budget and policy allow, investigations of environments that symptoms are most present. Ion detectors, blood tests, and brain scans can determine if your client has a mental illness and then determine how they can be helped. The common struggle is that most paranormal researchers and mental health professionals have little budget and don’t have access to such equipment. In the absence of empirical data, fabrication fills the gaps when ego fails to admit uncertainty. In truth, we don’t know if what is seen is a ghost or not unless we can test the client and the environment to the best of our ability. As scientists, as honest investigators, I believe we should disclose this.

Seeing something that “isn’t there” doesn’t mean your house is haunted but perhaps that you’re presenting a brain injury, a misinterpretation of stimulus, an eye disease, or even a hologram. Who are we to say unless we test for it. 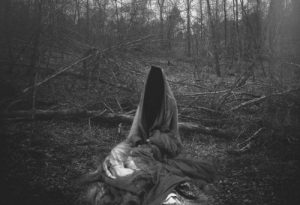 A recent case has been a home in Southern Minneapolis that I visit often. As someone who often experiences visual manifestations of my psychic intuition, I had noticed something darting from room to room the very first day I visited the home. Each time thereafter I would see something, the same sized shadows, acting the same way, in the same places of this old home. I began to feel casual around them and it was almost a year later before I mentioned noticing their presence. I wasn’t alone. Many others who had come to the house had also experienced seeing these ‘things’ and other stuff was happening too. The more we talked about it, the more things began to manifest. Things began to happen daily; items would move, shoes would vanish, keys would disappear, electronics would malfunction, and people were always seeing… things. Because children were often present, we didn’t want to talk in full details about the experience but finally an afternoon came where it was just us two, and things were moving around upstairs. We started to talk about it.

The resident had been seeing the same small creature out of the corner of their eye. Always from right to left. The issue is, this person also struggles with chronic migraines due in part to a past head injury. A bad car accident as a late teen has caused significant health concerns in their adult life and seeing something wasn’t a casual admittance. The interesting thing is, they were reporting the same thing I had been seeing and that others had reported to me as a third-party witness over the years. The same height, color, gender, emotions, experiences, time slips, items, animals, and repetitive themes were always present and correlating with one another. No deaths, no fires, no occult activity, and no nearby plaques to an ancient battle, nothing but an active shadow man that darted from the kitchen entry, sometimes in the form of a cat, and sometimes as a slender man. Birds, mice, bugs, small animals always showed up dead in the same windows, the same smell and staleness, the same water pipes bursting and phones dying. Having had a head injury, the client also had vision and vestibular issues so she had been tested for Charles Bonnet Syndrome; she didn’t have it.

What could this be? I didn’t have an ion tester, and my EMF detector didn’t read anything. The neighbors were Scandinavian, and no stories persisted in local folklore around the area. If we had a brain scan device, a CAT or PET scan, we could determine if the visual hallucinations were related to some sort of brain pathology. The fact so many of us were seeing the same thing, without having discussed it prior, without any environmental suggestion or clear presenting source, was odd. As a researcher of psychology, I try to determine if there are any indications of psychosis, delirium, schizophrenia, dementia, CBS, Anton’s syndrome, lesions, sleep disorders, drug or toxicity effect, a tumor or even developmental disorder. However, without equipment or specific testing, data is inconclusive and the client remains undiagnosed.

Disclosure to the client of all the possible reasons for hallucination sometimes only mentions the more scientific. But perhaps it’s a native Puckwudgie, an elemental spirit, an interdimensional alien, a shadow person, a demonic entity, or even a culturally unique shapeshifter; a Nekomata or Bakeneko. If we are to believe in psychometry, the energy of objects, we would all be forced to smudge the thrift store items we purchase for possible attachments.

A myriad of antiques around the home nestled in the woods and no one in the home is particularly religious. The mounting number of witnesses from differing backgrounds having the same experiences is becoming harder to ignore, but what does one call it? At this point, we’re not diagnosing, we’re simply observing.

Your thoughts and intuitions? Have you ever had a spiritual phenomenon or paranormal occurrence?