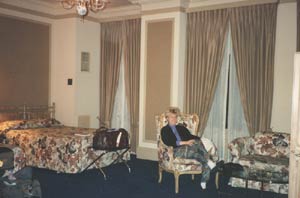 Back in May of 1991 my mom and I stayed at the beautiful St. Francis Hotel in San Francisco — we were there for two nights. The hotel was being renovated, so we stayed in the older section of the hotel. The hallway leading up to our room was very creepy… just "old" feeling. When we entered the room, it was very impressive and large, but still felt old and uneasy.

We left the room and came back hours later to sleep. I had a very strange dream that night. There were three people in my dream, two men and one woman. They were clad in old Victorian clothes and the two men were very angry and arguing. One of the men placed his hands around the other man's throat and began picking him up by his neck (something you'd see in a movie).

Suddenly, I began waking up from this angry/scary dream. But as I was coming to consciousness, I felt my body literally bounce onto the bed, as if I had been floating over my bed. I sat up rather startled and my neck hurt, as if someone had their hands around my neck (but not a choking feeling like a sore throat).

I still cannot explain this dream or the feeling I had when I woke up, but it scared me enough to wake up my mom right away to tell her my dream. Nothing happened that next night, but I was scared to sleep. This year, in October of 2003 (12 years later), a co-worker and I were talking about ghostly encounters and looking at haunted photos. I remember that we had taken photos inside the hotel, so I searched for my San Francisco photos and sure enough, found a photo of me in the large, spooky room of the St. Francis.

Well, I almost jumped out of my shorts when I looked at this photo, to find a large orb right near the chandelier.

Yes — something was there with us that night. I still can't explain that dream I had, or what happened to me — but I can certainly justify that we weren't the only ones in that room and there were some very angry spirits too.