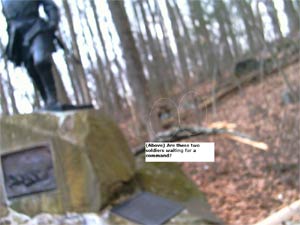 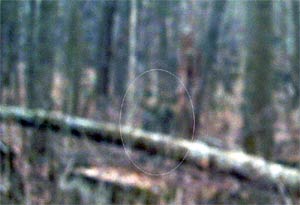 Upon purchasing a number of ghost books and reading further into the Battle of Gettysburg, my sister and I decided to take a mid-week journey to the battlefields in hopes that we would encounter ghosts or spirits. What happened to me what nothing like I had in mind.

During the first day, we drove around the battlefields and snapped different shots of just random statues and memorials and sometimes just even the woods. Our first picture, that of a simple plaque, contained our first orb. Frightened but excited, we drove on, snapping more pictures of anything we had a feeling about.

Later that night, around 9:30 PM, we ventured into the battlefields again, in hopes of discovering something. Not even a mile into our journey, freaky things began to happen. When trying to snap our first picture, both of our cameras (that had just gotten brand new batteries) went dead. Also, the windows of our car (all of them) got stuck in the down position. The electric windows did not work. Maybe this should have been a sign to go home, but being stubborn, we ventured on. What happened next will haunt me for the rest of my life.

While traveling to the Pennsylvania Memorial, I happened to glance to my left at the row of cannons that lined the street. There he was, staring straight at me. He was a confederate soldier who looked to be about the age of 18 and dressed in full uniform. He sat near the wheel of the cannon, legs crosses and hands in lap. Almost instantly, I began to cry and it felt like someone was gripping my lungs so I couldn't breathe. I automatically started shaking, and according to my sister, I appeared to be in shock. I had had it. That was enough for me.

As we drove on, I decided to stop and take a picture just to see if anything showed up. When I rolled my window down this time, I heard footsteps coming toward the car. I had tried to play off the vision of the soldier as just a figment of my imagination, but the sounds of footsteps were just too real. I bolted! I didn't get the picture however, I was just too afraid.

The next day we saw nothing. When I loaded my digital pictures onto my computer, I scanned them all carefully and found numerous orbs and unexplainable lights. The best picture though, was one of the woods — simply taken in our random photo shoots. In the middle of the picture, as plain as day, was my soldier, adorned in confederate attire and peeking out from behind a tree. It appeared that he was following me.

These pictures were taken with a Sony Cyber-Shot digital camera. In both pictures the sun was at my back and the windows were rolled down in my car.

Now that I'm home, I get feelings that someone's watching me, or I'll see the soldier in a reflection or just in my head. If there's anyone out there that has experienced anything like this or is an expert, please feel free to e-mail me. I'd love to find out more about this soldier and why he chose to show himself to me.