Nightfall had come at long last. It was time to gather our ghosthunting gear, clear or minds, and return to Primrose Road to continue our investigation. As the girls loaded up the van, Sampsun and I were having a private conversation about something odd that had happened to the two of us at a restaurant earlier in the day; something that we were debating about whether or not to discuss with the girls. We had both simultaneously experienced a premonition at the restaurant that had us deeply concerned; a premonition of a shotgun blast on Primrose Road. Our debate was centered on whether or not the premonition felt dangerous enough to call off the investigation. Even though the premonitions of a shotgun blast were obviously nothing to shrug off and take lightly, we sensed no inherent danger to the team. We decided that we should proceed with the investigation as planned. Something about the premonitions felt residual: Something that had happened rather than was going to happen. We decided that it would be in the team’s best interest to not concern the girls with our experience. We kept the premonitions to ourselves and headed for Primrose Road.

It was a typically chilly, mid-September night in Northern Indiana, and as we approached the turnoff for Primrose road, a dense mist greeted us. Fingerlike wisps of vapor poured from the woods and disappeared into the dark fields of harvested corn along the roadside. The mist was nothing more than one of Mother Nature’s parlor-tricks, but it added greatly to the ominous look and feel of the entire Primrose area. I had a pretty clear picture in my mind of what I thought Primrose Road would look like after nightfall, and as I turned the van onto Primrose’s rough gravel surface I wasn’t disappointed. If Primrose Road wasn’t haunted, it certainly looked as though it should be. The thick, tunnel-like canopy of trees towering overhead was creepy enough during daylight hours, but after dark Primrose Road became an entirely different world. 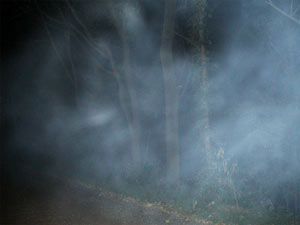 It was plain and simply eerie. Shaking off my wonderment, I reset the van’s trip-meter and we proceeded up the road to where Amber and I had experienced the sense of great sadness earlier in the day. Upon reaching our destination, I pulled the van off the side of the road, turned off the headlights and killed the ignition. I grabbed my flashlight and was about to exit the van when my wife, Becca latched onto my arm and in a very serious voice said, “Fox, we have to get out of here right now.” I turned on the flashlight and shone it into the back of the van. What I saw there was deeply disturbing. Becca and Amber were both shaking and looked very scared. Their faces were pale and bleak. “Something’s wrong! You have to get us out of here.” Amber urgently agreed. I myself sensed nothing unusual, but rather than question my teammates, I started the van and continued the slow drive down Primrose Road. After a few moments of uncomfortable silence, I asked the girls what had happened. They both stated that for some inexplicable reason they had experienced an overpowering sensation of foreboding in the spot where I had parked the van. They also both agreed that the sensation had vanished as soon as we were clear of that area and that they were okay to continue with the investigation. Even though the girls seemed genuinely stable, I suggested that it was probably a good idea to get clear of Primrose for a while and check out Adams Street Cemetery. They enthusiastically agreed.

Adams Street Cemetery is nestled in the midst of several small neighborhoods, and I was suspicious that the accounts of paranormal activity (ghostly lights and strange mists) were of earthly origin. Upon entering the dimly lit graveyard, the entire WISP team felt the same thing that we had felt earlier in the day: absolutely nothing. Even after nightfall, Adams Street Cemetery seemed devoid of otherworldly feelings and sensations. Even though Adams Street Cemetery seemingly offered little promise of authentic paranormal activity, I nonetheless asked the team to disperse themselves throughout the graveyard to see if they could pick up on anything unusual. After about thirty minutes of hunting, no one had anything to report. Becca had, however, snapped quite a few digital photos on her jaunt around the cemetery, and upon inspection, a few of the photographs in the viewfinder seemed to reveal the purported strange lights. Using the headstones as markers, we were able to pinpoint the exact locations in the graveyard where the photographs had been taken. Unsurprisingly, the strange lights that seemed to be hovering inside the cemetery in the photographs turned out to be nothing more than houselights and streetlamps shining through the trees and bushes from the surrounding neighborhoods. “But what about the strange mists?” I asked aloud, and as if in response to my inquiry, a car sitting in a driveway across the street from the cemetery roared to life. A thick cloud of blue-gray exhaust rolled over the road and swirled about the edge of the graveyard. In the minds of the members of team WISP, the reports of ghostly lights and strange mists in Adams Street Cemetery had been debunked. With nothing at all unusual happening at the graveyard, we decided that it was time to head back to Primrose Road and further our investigation. What we encountered upon our return made the sensation of foreboding the girls had experienced earlier feel weak in comparison…

Next Month: The Conclusion