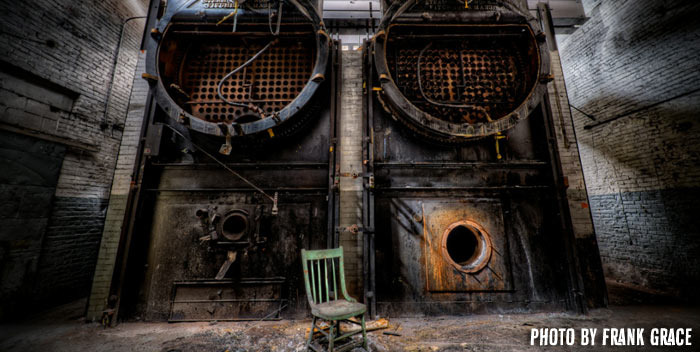 I first got into the paranormal on October 16, 2011, when it was my eleventh birthday and my Mom and I went on a ghost tour of a War of 1812 fort and we saw a strange shadow. Since then, I’ve created my own paranormal group and expect to ghost hunt many haunted places like the Waverly Hills Sanatorium in the future.

Today (technically this night of October 24) my Granddad took me on a ghost tour which had a bunch of people get led around a small part of Jordan Village in Southern Ontario. There was this one point we got to go to a nice winery building known as the Caves Spring Winery (or Cave Spring Wine Shop). Here, we got to descend down into the cellars here.

Before that, we were informed about the three main spirits here. One was a nice female spirit named Margaret, the other was an unnamed male malevolent entity, and the other was a horse who is said to have had a heart attack and you can hear the hooves on the cement clip clopping along.

Anyways, our group of 30 or so people headed down to the tunnels and we learned a bit more of the history and discovered we could enter one of the supposedly haunted tunnels where screams and voices have been reported. When I went in there with my grandpa and two women on the tour, it was just 4 of us because we went 4 at a time, it was somewhat chilly.

At first we didn’t hear anything, just looking around for a moment then taking pictures. Then it happened.

There was a loud clang right near us. It was as if someone picked up a sewer grate and dropped it right by us. We thought that they were closing the door on us and we’d investigate the tunnel alone but the door was open and the tour guide didn’t seem to be reacting to the sound.

Then it happened again, the same loud clang, maybe a little bit louder, only a second or two after the first one. It was getting a bit closer to us now. Moments later, there was a third clang. All four of us hurried out of there. I didn’t get a negative feeling but more shocked like “Wow! That’s interesting!”

Once the tour was over, I spoke to the guide about it. She claimed she didn’t hear a thing, nor did the rest of the tour group. But they were so loud, someone besides us must have heard it but there was no noise.

The Cave Springs Winery is in operation on the upper floors, sometimes busy, but the floor is thick and we were at least 10-plus feet underground, it would be very difficult for sound to get through! Even so, it wouldn’t sound like it was close by, it would be muffled The tunnel didn’t have any vents for noise to travel through and there was only a staircase way out the other end of the tunnel. It would be practically impossible for a noise like that to get through.

I was lucky enough to capture these noises on video and if I could upload the video to this, I would and in the future, I will make more stops to Ghostvillage and submit more encounters and evidence if I can.

Can I verify what we heard was paranormal? No. I can’t conclude it was paranormal but based on the evidence gathered with thick walls and a thick floor above us and nobody but us four in the tunnel were able to hear these three loud noises, there might be something there. I’ve heard stuff about three knocks or scratches means a demonic presence and yes, I do believe demons exist. Was this a demon? This is somewhat unlikely. I’m a bit paranormal sensitive, I can’t tell when a spirit has entered the room and when I have encountered a negative entity which I have before at a local cemetery (not in Jordan). If this were a demon, I would probably feel the negative presence as a very, very uncomfortable feeling in my chest. I have a slight heavy feeling in my chest when a good spirit is in the room, not wanting to do harm, probably just making itself known. If this were a ghost, I’d guess it was Margaret as she wants people to acknowledge her existence.

Personally, I would recommend taking this tour where you’d have to speak to someone at the Jordan Historical Museum and the tours sell out fast and are usually in October. Of course, to put you in the mood for Halloween, there are people dressed up and hiding behind trees and stand there silently to freak you out. Many places on the tour had ghost reports surrounding them but I do believe the Cave Springs Winery is haunted.