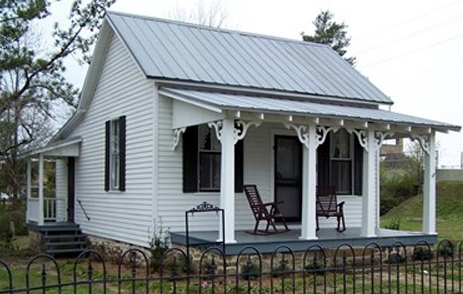 I was at the Weiss Cottage in Cullman, Alabama, (it’s a very small town) when I saw a short, elderly man wearing a lab coat standing in the middle of the main room looking around at the other people in the cottage. He seemed to notice me looking at him strangely and looked shocked, even scared maybe. He looked to be speaking, but no words were coming out of his mouth. I could very clearly see what he was trying to say, though, “You can see me?” he mouthed. At this point I was proper spooked. I’ve never believed in the supernatural, but this cottage already gave me a weird vibe, and now this happened, and I was scared. I grabbed my sister and pointed at him and she didn’t see anything. My boyfriend, Andrew, saw him, though. He thought my sister was joking, but once we both said lab coat my sister looked proper scared too. She said that the Weiss cottage is named after a physician named Aldo Weiss. I looked at the figure in the lab coat and mouthed “Aldo?” To him, and he simply nodded, smiled, and disappeared. This was two days ago and I’m still terrified out of my mind.