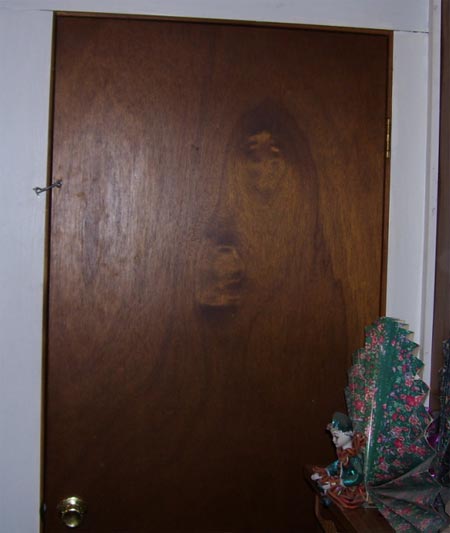 We had recently purchased a couple of doors and decided to put this one on the cellar to try and keep out some of the cold air (the door that had been there had a large gap at the bottom). The door had been up for a few days, and no one had noticed anything out of the ordinary. One night we were sitting at the kitchen table playing cards, and I just kept feeling like I was being watched. I looked over at the cellar door and saw something basically staring back at me. I asked the other people at the table if they were seeing what I was. I never had to tell them what it was that I was seeing. They noticed it immediately. We didn't notice anything before, but that's not saying it wasn't there… we just hadn't noticed it.

Being able to see it up-close and personal is quite different than the photos. The details are much more visible. It kind of looks like the Virgin Mary… yet it resembles the Grim Reaper. Regardless, there is no sense of calm or fear having it present.

As for anything strange happening, if you ask my oldest son who's 18, he's had some bizarre experiences… things falling for no apparent reason, an issue with seeing "something" in our full-length (standing) floor mirror, and something to do with smoke in the mirror. However, the weirdest thing was a voice he picked up on a tape recorder when he was in the attic. He was asking his girlfriend a question, and you could hear someone answer "yes," but it wasn't her. It didn't even sound like a female voice. I try to come up with explanations for what I can because I have three smaller children. As for the cellar door, I just don't know what to say.