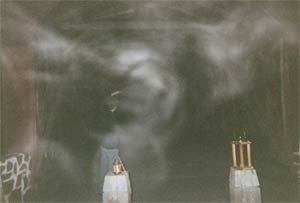 Every year on the weekend closest to November 19th, Gettysburg, Pennsylvania holds a Remembrance Day Parade to mark the anniversary of the Gettysburg Address delivered by President Lincoln on November 19, 1863, just four months after the most horrific battle of the Civil War. (over 53,000 casualties)

This brings out about 2000-3000 Civil War reenactors, both Union and Confederate for the parade. It also seems to stir up some of the spirits from the real Civil War.

Just to the west of the National Park is a small covered bridge called Sachs Bridge. People think the battle only happened on National Park property. It actually happened throughout and included neighboring farms and homes.

After a quick supper, my friend Al, my 16 year-old nephew, my 14 year-old daughter, and myself decided to venture to this bridge. The date was November 2000. Al told us the story history tells: As Robert E. Lee's troops were withdrawing from the field, three Rebel soldiers were found to be spies. A speedy trial on the spot found them guilty and they were hanged from beams in the covered bridge. Their bodies were discovered by Union soldiers patrolling the area.

We pulled the car to the parking area nearby and got out. All of us were dressed in period clothing, including my daughter in a fancy dress and bonnet and cape. We lit a couple of candle lanterns and walked across the bridge. We heard a crying cat on the other side in the woods, but as we crossed, decided to return.

Upon reaching the beginning again, my nephew took out his camera and flashed a quick picture of the opening of the bridge. I knew I had a Kodak disposable camera I wanted to finish off myself. Within seconds, I took this photo. My nephew can be seen in the picture, but he's not alone!

The weather was about 40 degrees and clear. No mist or fog was visible to us. I didn't see this until getting my pictures developed. His film showed nothing but the bridge.

This is one of many things that I've encountered on battlefields, especially in Civil War clothing. Makes you wonder if they're trying to connect to people who look like them.