Electronic Voice Phenomena (EVP) has been an essential part of paranormal study for over a half century. Raymond Cass was an influential researcher into this phenomena and few investigators are aware of his seminal contributions. 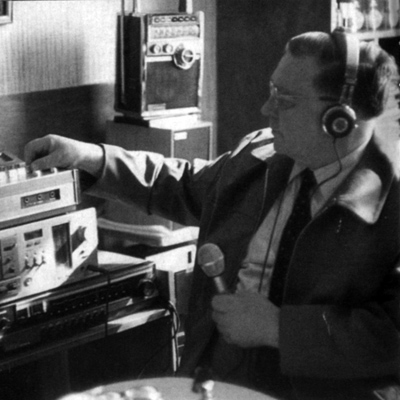 (Photo courtesy of The Raymond Cass Foundation)
Many of us have read about pioneers of EVP study going back to the 1950's featuring researchers such as Konstantin Raudive and Friedrich Jorgensen. Their worked involved studio and outdoor recording sessions. These two men certainly played a major role in developing what paranormal investigators have grown accustomed to today; the capture of unexplained voices on a recording device.

Another member of that very select group was Raymond Cass from the United Kingdom. Although his name may be lesser known than the previous two, he was equally as important with his achievements in EVP research.

Jurgenson and Raudive did not start paranormal research until they were past the age of fifty and their interest was initiated by random events. Both men were accomplished in different ways prior to embarking on their paranormal journey. A young Jurgenson had dreams of being an opera singer. Jurgenson was a filmmaker and flourished as a painting artist throughout his life. His portraits of Pope Paul VI were a highpoint of his career. These achievements occurred before happening upon the voices he heard on his reel-to-reel while recording birds in 1957. Raudive, on the other hand, gained interest in the EVP field during the mid-1960's while assisting Jurgenson with one of his experiments and only then decided to conduct his own variations of Jurgenson's work.

Unlike his Eastern European colleagues, Cass's fascination with the supernatural came at a much younger age. Cass's interest began when he was a small child playing with his grandfather's radio equipment. He encountered random voices coming through as the radio system was shutting down. It wasn't until Cass was at an older age that he began to fulfill his need to search for his own answers. He would later become a member of the Fortean Society (named after Charles Fort), which focused on paranormal and psychic phenomena, and other things like poltergeist activity and supernatural events.

Cass began to study psychic phenomena and joined a group in Hull, England. He would later learn that a distant relative was a prominent medium and founded a psychic society in his hometown several decades before Cass began his own inquiries. In fact, Cass discovered that he came from a long line of psychic mediums, something he did not know before becoming interested in the psychic field.

As an avid practitioner in acoustics, he quickly became a prominent figure in EVP research and began working with some of the better known researchers in the United Kingdom.

One aspect of his auditory work stood out from many others at the time: he was not only able to record more efficiently and clearly than others, the voices he heard came in what is called a polyglot form. This means that his recordings were speaking in several different languages all at the same time, or even bouncing from language to language with each word spoken. He came under fire from critics because most of his recordings were at the 127 Mhz frequency and were suspected to have been anything from bleed-through from airplanes to land based sources was such as ham radio operators, radio stations, or other public broadcasts. He also used a radio receiver to record while in his office.

All these reasons could be viable criticisms except for one thing: the voices spoke in foreign languages and mentioned his name. Some of his recordings went from German to French to English and then back to German at any given point. Some even mentioned Raudive after he had passed away as if conveying messages from Raudive himself!

The voices would also answer questions in polyglot form — questions that Cass had asked beforehand. It was thought that his psychic connection and mediumship abilities were a conduit for the voices coming through. That aspect of his research made him stand apart from Jurgenson and Raudive, who were new to the paranormal field when they made their discoveries.

One popular opinion today is the belief that a good bulk of EVP can be obtained within the infrasound spectrum (19 Hz and lower). This is lower than what the human ear is normally thought to be able to hear audibly. Cass was using the 127 Mhz frequency, which is considerably higher. Jurgenson had set his radio frequency at 1445-1500 KHz, now called the Jurgenson Frequency. With all these varying frequencies within the audio spectrum, it only goes to show that EVP research has advanced as far as one would think considering many in the paranormal field are still researching for a more widely used frequency to emerge as the "door to the other side."

Today, some of his work can be found on different websites including one dedicated to Cass by the Raymond Cass Foundation. The Parapsychic Acoustic Research Cooperative, or PARC, released a compilation of Cass's work called The Ghost Orchid for everyone to analyze and come to his or her own conclusions. It includes his polyglot recordings throughout his career and has some of Raudive's work, as well. Although information about Cass isn't as abundant as Jurgenson and Raudive, his contribution to the early years of EVP research was just as important.

He opened the casual observer's eyes and spent a great deal of his time working to prove the validity of his recordings to his critics. You can take the first step of experiencing his work for yourself by going to the dedicated Cass website with his audio clips, or you can download The Ghost Orchid at the PARC website. Whatever conclusion you come to of his research, you will surely develop an appreciation for the many hours of Cass's dedicated work.