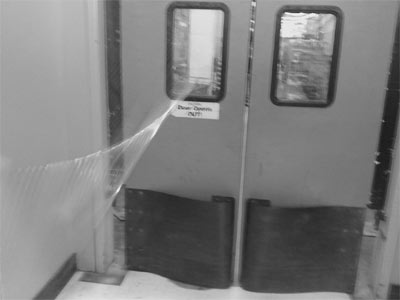 This passed year a fellow paranormal enthusiast and I heard this story of a man who was killed in this old warehouse in Rochester, New York. As the story goes, his ghost haunts the warehouse as he's still attempting to work on the old stock floor. He is known as Old Jim, still trying to work the old abandoned lifts and organize the old shelves, not knowing his purgatory state. I've met several other witnesses stating they feel cold air rushing by them at sudden times and then hear the rustling of the shelves and machinery. I had yet to meet a witness, however, that possessed a picture of Old Jim, which is when we decided to finally get photographic evidence. Possessing nothing more than my Verizon Venus Camera phone and its night shot, we sought the famous old ghost that haunted the warehouse. On the night of January 24, 2008, we went in to the stock floor in search of Old Jim. We heard a few sounds, but nothing out of the ordinary, when out of nowhere I felt a chilling wind rush by me. My associate felt it just the same and looked at me asking if I had felt it too. I affirmed and as I looked up I notice the stock floor door sway ever so slightly. I snapped a picture at that very moment of the door. Seeing nothing I was disappointed thinking I had missed him. I reviewed the picture moments later and there it is, clear as day. A white streak running in mid air going through the open space of the door. It was amazing and we couldn't believe we were the first to finally get a picture of this famous local resident among the town.