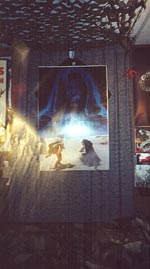 A friend of mine lived in an old converted farmhouse in Milford, Massachusetts, he had told me that his house had a ghost (in fact he claimed it was a young girl who had fallen into a well in the 1800s and as they had no way to rescue her, she died down there). They then sealed it up to prevent anyone else having the same problem. Now I know what you're thinking, this sounds a lot like the recent premise behind the movie The Ring, but as this was in 2001 that movie had not even come out yet.

Regardless, it is true that he did indeed have a ghost. I went over there quite a few times without anything super strange going on; mostly I'd just get this sick feeling. It sounds strange I know, but I had a near death experience in 1991 and ever since I have strange feelings when it comes to the dead. Whenever I am anyplace that is haunted I either get tightness in my chest (malicious ghost) or cramping (much like a menstrual crap for a kind ghost). So after much cramping (yes I believe the ghost was inherently good despite the following events, after all it was supposed to be a lonely child), one day in late October (the week before Halloween I believe which always seems to be a very active time for ghosts). My friend went upstairs to use the bathroom and I was downstairs using his telephone to talk to another mutual friend of ours. All of a sudden I felt as if someone had grabbed my right shoulder. I was startled and before even thinking it could be my friend playing a trick on me, I thought it could be the ghost. I spun around, but no one was there — my fears were confirmed. I left his house that day rattled, but got the courage to come back several more times. It seemed quiet again after that for a while. Until one day when I was leaving I found my purse was strangely open when I thought that I had closed it. This normally wouldn't seem unusual had it been a regular zipper, but on this bag you really had to work at it to get it closed and there was no way to open it if it was hanging on my shoulder (I used to wear it a lot in the city to prevent pickpockets). Yet here it was very open to the point the stuff inside almost fell out! Well needless to say I didn't go back there for a little while. But my friend wanted a favor; we wanted me to take pictures of him in an outfit he used to wear to King Richard's Fair. He was friends with one of the authors of the Dragonlance series, and was hoping that he could get his picture painted by the same person who did the cover art for the books. I was hesitant, but went anyway. After a long series of pictures, two of which were just of his room to use up the film, I made my way home. After getting the pictures developed they were all normal, except for one. Of the two I had used to finish off the film, one was normal, yet the other had this strange glowing shape to the left side. If you look at it carefully you can almost see long black hair, unfortunately it is too cut off to see any face, but it is I believe that the girl was caught on film (especially since the two shots were taken within seconds of each other). I never saw that friend again at his house after that, only in other locations. Here is the picture of my friend's bedroom in which she appears.