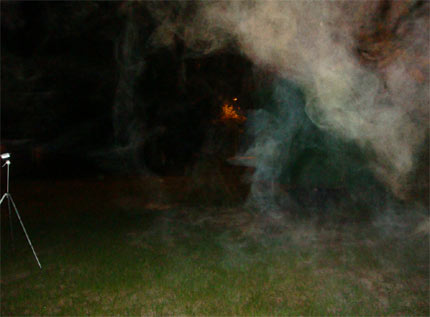 It was October 1, 2009 at 1:29 AM. I was out in our back yard doing some filming for some people that wanted some video of our property for a TV special — you know, to get an idea of what's going on here. Well, first let me tell you a little about our property. We bought this land in 1992. We were traveling with a show and came into Pensacola, Florida. We had a week off before the show opened up for the weekend. So we wanted to live in the area. We found another little town outside of Pensacola that had some acres and fell in love with the place, we thought. We knew something was strange about the place but really didn't know what.

Anyway, we bought it on the spot. To cut it short, we moved in at Christmas of that year. With our job that we had we were only there for two months of the year, so we really didn't have a chance to get to know what the place was really like. Every time we came back around Christmas, we worked on the place getting it fix up. We began to notice things came up missing, like tools, measuring tapes, and scissors. We thought first it was our mistake of placing them in the wrong place, or thought the other person of the household borrowed them. We were wrong.

It wasn't until 2000 when we retired from the road we noticed that we bought some haunted property and house. It started with little things from misplacing things to knocking at the door, windows slamming, water running, TV sound turning up or down by its self.

I went to the record department of the court house and got some historic information about our property. It was homesteaded 164 acres by a African American in 1907, and his name was William Anderson. He had Three wives. From those three marriages he had only one son named Albert L. Anderson. Well, come to find out in 1970 his son Albert L. Anderson sold the 164 acres to two men who were white. Albert told them it was an Old Spanish Slave Cemetery in the area and it was called the Old Holly Cemetery .Come to find out, somehow someone forgot to mention the location of the cemetery.

At the Deed Property Appraiser office they had a map of the area and in the area they had a small cemetery called the Nichols Lake Cemetery. And on this paper that they had in the Book of Cemeteries, it had two graves on the other side of the lake and gave the directions where about the location where the two graves were.

It said from these two graves south was once an old black cemetery called the Holly Cemetery. Well, they made us a copy of the map of the area and from these two grave sites the lady in the deed office drew a line from the two graves south of it and ended at a piece of property. She said whoever lives there must be where the Old Holly Cemetery was. Come to find out that's where our property was.

Now, I find it kind of strange, how did someone overlook this, but they did somehow. So this is why we are having the problems that we are having. I found out later through research on the Internet, we found some relatives that are kin to the Andersons. They did tell me that they knew of the Old Holly Cemetery, but it was an Old Spanish Slave Cemetery. And the owners knew that. I guess they just overlooked it when they divided the property up to make a subdivision. We live on a corner lot on 1 1/4 acre .Of course where the cemetery is located at.

So now we have had an ghost team to come out from Pensacola to do an investigation on our property. They were very professional of what they did. They caught a lot and they brought in an psychic who was well known to the area. Their team did a excellent job in catching spirit activity, orbs, EVPs, and some of the best EMF readings ever. They put all of this into a book — I was impressed — this was way before TAPS was ever on the horizon.

Since then I have taken way over 50 to 60 thousands photographs. We have had a lot of people here; they come and go some come back for second and thirds. They just don't believe what's here. A lot of things go on here day and night, but I will go into full detail on that because I think I have said enough. I know all of you would like to hear the story that I am about to tell you, and the photograph you're about to see.

It's starts off on October 1, 2009, it was in the morning at 1:29 AM. I was out on our property videoing for some people to get some idel of what's going on here of the spirit activity that we have here outside on our property. If they were interested in the video, then they might come back to film for their own television show. I was out behind the old storage shed where lot of the activity occurred.

In this certain location you can get all kinds of energy, smells, tapping on your shoulder, and on your head, hear voices, and other stuff like walking behind you. It's so active there you can even catch large and small orbs floating across the roof of the shed, which I have in the past, which now you can see on youtube.com. I will tell you how to get there later. Anyway, I have set my camera up to film this fantastic phenomena.

I was sitting on a stone beach talking to the spirits like I always do before I ever get started. I normally tell them what's going on in the world of today, in the spirit world, which I understand is that they only know what has happen at the time when they were alive, or the time of passing over. Which in my experience they haven't passed over yet they are still here but in another plane.

So I sat there talking to these spirits. I was asking them, could you come closer to the camera so I can take your picture? This might be help you to cross over the heaven. If you do what I say. Now, I don't think I said nothing wrong, because I pray every night for God to put his hand on their souls and guide these poor spirits to The Kingdom of Heaven. If it works, I don't know, but every night I do pray for these lost souls.

Anyway, I got up and was walking away to take some picture with my camera which is just a 10.1 mega pixels Cyber-Shot made by Sony. Well, while I was walking away from the stone bench I crossed by the video camera and just went by it about three feet when I felt something brush against me like a person in a hurry – you know how kids gets in a hurry and they rush out the door and brush against you? Well, it felt like that.

It caught me by surprise. I turned around quick and took this photograph. Boy was I surprised when I looked down in the LED screen. I saw something like a person, but not sure until I got back into the house. Normally I take anywhere from 200 to 500 hundred pictures per night, it depends what mood I am in or if they suck the energy out of your batteries sooner than you want them to.

Well I went into the house and could not wait to see what I had caught. I rushed in and downloaded them on my laptop. Wow, I was impressed with myself. This is the best one yet that I have caught. I have held on this one until now.

Now what I think I have here is a person walking closer to the camera with something in his hand, and what it is I really don't have a clue. There is spirit mist or ecto as some would call it. Lots of activity going on here. This is the way the picture turned out. I have not done nothing to the picture at all. I would like some remarks from some of you out there of what you think!

Everyone can see all of my videos and some other photographs on www.TheSpiritsOnTheLand.com