It is always interesting to find your presence has coincided with a friendly ghost who wants to converse. Let me tell you about my experience with such a situation. My encounter was with Wiliford.

Wiliford was just there one day on the second landing of the home where my wife and I live. An old, comfortable home, it was built not long after 1900 and has an enjoyable feel about its atmosphere. Located in an area of intense American Civil War conflicts, and the World War One Flu Epidemic as part of its Missouri history, it is mostly quiet and a comfortable, old renovated home. Sometimes a ghost passes through. Sometimes I manage to encounter them. As my late Uncle, Willard David Firestone told me at times, “You seem to have an affinity for ghosts and extraterrestrials.” Well, they do at times find me, and vice versa, and that is all right.

Wiliford first appeared and told me in a dry husk of a voice: “I have no quarrel with you.” It was a visual and telepathic encounter, and amazing in its clarity. At that initial encounter, he appeared lanky, tall, and faded as quickly as he came. I dismissed it as a ghost in transit. But a recent contact suggested otherwise. Let me now share that contact with you.

First, let me give you a description of this ghost’s apparel and the overall setting. He wore the clothes and tie of a circuit rider, which is a broad term for a cleric who travels the country preaching the word of God. He wore no hat. The circuit rider may be of the Christian faith. There are different opinions of what this roving cleric did, and was capable of.

At the moment of contact, I was looking for some CDs, an old jazz CD, in fact. Not so oddly enough, after he departed, the CD appeared on top of a small oak table amongst some others where it had not been before. Ghosts and entities can, and do, borrow things at times; usually, they return them.

Let me share the actual contact with you. Suddenly, I turned around and there he was. I thought to myself, Well, here is the lanky old man again! He looked at me and said, “I have no quarrel with you.” I said, in turn, “I have no quarrel with you! So, that’s settled. Do you have a name?” The ghost answered: “Wiliford.” I heard his words in my mind, and he had a pleasant voice. The thought crossed my mind that Wiliford might be more than a ghost, possibly an entity in transit, or something caught up in a time portal. We looked at each other, and he nodded as I did. Then he was gone, vanished as quickly as he had arrived. I went on my way, and so did he. 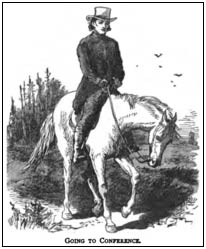 Later, I came across a vintage drawing of what is oftentimes referred to as a circuit rider. Although Wiliford was much older and much more weary looking, this is close to what I saw. Now you can see it as well, and maybe you will come across such a being in your lifetime and know it for what it is.

I wish Wiliford well, wherever he is on his way to. Whether a ghost, time portal participant or resident, or a lingering at-will intelligent haunting out for a haunting looking for somebody to talk with, it is becoming evident with the passage of time that the thin veil that separates human reality from paranormal reality is becoming leaner, and more frail, as time runs out for humankind as we have come to know it. Will the dead contact humans the closer time it comes for most of humankind to blink out of existence, is there a message they may have for each of us? What?

We will know soon enough. Everything comes in its own time.

I enjoyed the contact. My wife has also seen this Wiliford at times. Others have sensed his presence. What was his precise era, that I have no idea. But wherever you are, Wiliford, come again. Best of travels to you. Thanks for the visit and the conversation.